Asheville Area Habitat for Humanity (AAHH) will celebrate the completion of its’ 200th house with a closing/ key presentation in the Enka Hills community on Tuesday, March 30 at 12 noon.
The event program will include a proclamation from the City of Asheville; a $350,000 check presentation by HomeTrust Bank who sponsored grant applications that help reduce Habitat family mortgages; words from Habitat board and staff members; remarks from the homeowner family, the Notebooms; and the official key presentation. Attorney Marc Rudow will walk Chad and Christa Noteboom through the closing documents and upon signing, house sponsors will present the keys to the Noteboom’s new home.

Of course, increased house production requires increased funding. Habitat has been fortunate in recent years to receive funds from the Federal Home Loan Bank of Atlanta (FHLB), which is administered locally by FHLB-member HomeTrust Bank. Thirty-five Enka Hills homeowner families - including the Notebooms - have a $10,000 reduction in their mortgage, thanks to $350,000 loan from the FHLB.

AAHH’s Development Director Jim Lowder says, “HomeTrust Bank alerted us to FHLB’s Affordable Housing Program and sponsored our grant application. The resulting loans help homeowners because their mortgage is reduced by $10,000 and they can build equity faster. It also helps the organization because we get the funds upfront rather than spread over a 30 year period if it was in the mortgage. That means we can immediately begin using the funds to off-set construction costs.”

“HomeTrust Bank is proud to help Habitat fulfill their mission, and the $350,000 in grants we sponsored will help dozens of families own their own homes; it’s one more way we can give back to our community,” said Tony VunCannon, HomeTrust Bank CEO.

Since 1983, Asheville Area Habitat for Humanity has welcomed 200 Buncombe County families to safe, decent and affordable houses. Habitat homes, which are HealthyBuilt certified, are sold at no-profit to partner families, who pay back a no-interest loan.
Posted by AshevilleChamber at 11:39 AM 1 comment:

A couple of tips about nominating:
Check out googleavl.com for more information!

Posted by AshevilleChamber at 1:10 PM No comments:

The Asheville City Council unanimously passed a resolution supporting the return of passenger rail to Western North Carolina at their March 23, 2010 meeting.

This resolution is one example of the activity that is going on to bring passenger rail back to Western North Carolina.

If you are mentioning efforts and interest on passenger rail then you have to discuss former Asheville Area Chamber of Commerce Board member, Judy Ray of Tyco Valves in Black Mountain. In 1999 Judy Ray helped to establish the Western North Carolina Rail Corridor Committee. This committee is comprised of local government, chambers of commerce, and interested citizens from communities along the rail line including Statesville, Conover, Valdese, Morganton, Marion, Old Fort, Black Mountain, and Asheville.

The group meets quarterly and works to keep Western North Carolina’s desire for passenger rail on the minds of officials at the NC DOT and our elected officials in Raleigh and D.C. Many of the towns along the corridor have begun to renovate their depots to have them ready for when passenger trains return.

On April 7, 2010 members of the Western North Carolina Rail Corridor and myself will be going to Raleigh (by car as there is no train yet) to speak with Representative Rapp’s House Select Committee on Comprehensive Rail Service. The group will provide the committee member’s with an update on the WNC Corridor Committee’s history, current efforts and request for funding to bring passenger rail back to WNC.

There is still a long road to go before passenger rail will return to Ashville. However, it appears a window of opportunity is opening with the current elected official’s interest in multi modal transportation, the riverfront redevelopment and the current administration’s interest in rail. I want the Asheville community to know how hard the Asheville Chamber has worked on this issue for several years now and how excited we are to see slow but significant progress being made.

To support the effort to bring passenger rail to WNC please join The People for Rail to Asheville at http://www.facebook.com/#!/group.php?gid=317583086629
Posted by Public Policy at 4:15 PM 1 comment: 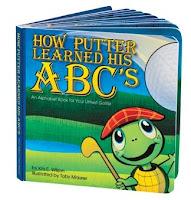 Chamber Member, The Littlest Golfer, has announced that it has begun shipping the first in its series of children’s golf books.

How Putter Learned His ABC’s is a large-format board book that introduces children to common golf terms and their alphabet while playing 18 holes with Putter and Sandy. This new children’s golf book has received a warm welcome from “inside the ropes.”
Although The Littlest Golfer is best known for its playful collection of children’s golf apparel, an educational series of children’s books has always been part of the company’s original vision.

“That’s what makes The Littlest Golfer unique in the industry,” company founder Kris Wilson explains. “We are the only children’s lifestyle brand that offers a complete line of golf apparel, accessories, books, clubs and toys just for kids.”

“All of our products are designed to make golf fun and exciting for the youngest of golfers,” Wilson explains. “Our core mission is to grow the game. Our children’s book series will help us do just that!”

Golf professionals and parents think so too.
For more information about The Littlest Golfer’s children’s book, apparel and accessories visit thelittlestgolfer.com or contact info@thelittlestgolfer.com.
Posted by AshevilleChamber at 2:18 PM 1 comment:

Asheville Area Habitat for Humanity will kick off it’s 2010 Women Build program with a Wall Raising on Friday, March 19 at 12noon. The event will be held in the Woodland Court subdivision in West Asheville.

The event program will include words from Habitat staff, Women Build leadership, homeowner-to-be Felicia Searles and Felicia’s supervisor (at Head Start), and a song from local blues singer Peggy Ratusz. The program will conclude when volunteers, sponsors and the Searles family join together to raise the first wall of the 2010 Women Build house.

Women Build encourages women to build homes, enabling them to impact the lives of children by making homeownership a reality for families in need. The 2010 Women Build house is sponsored by The Stiver Family Foundation, “The Three Marthas (a local family), and AdLib; and it receives additional support from the community at large. Lowe’s is the national sponsor of Habitat for Humanity International’s Women Build program. Nationwide, over 1,500 homes have been constructed through the Women Build program. This is the fifth Women Build House built by Asheville Area Habitat.

Since 1983, Asheville Area Habitat for Humanity has welcomed nearly 200 Buncombe County families to safe, decent and affordable houses. Habitat homes, which are HealthyBuilt certified, are sold at no-profit to partner families, who pay back a no-interest loan.
Posted by AshevilleChamber at 2:24 PM No comments:

AvL Technologies, in conjunction with the Economic Development Coalition for Asheville-Buncombe County (EDC), proudly announces the expansion of its Asheville-based operations with a $5.9 million facility investment and the addition of up to 75 high wage jobs over the next three years.

AvL Technologies designs and manufactures transportable parabolic antennas for two-way, real-time satellite communications used in the television and broadcast industry and emergency services, along with government and military applications for communications from remote locations. AvL Technologies was founded by Jim Oliver in the basement of his Asheville home in 1994. He later moved the company to the A-B Tech Small Business Incubator in 1998 when Oliver hired his first employee. AvL Technologies is currently located in Asheville’s River Arts District.

A major component of AvL’s expansion will be the relocation of its facilities to a renovated space in the Newbridge Shopping Center in the Reynolds Village development in Woodfin. This move allows AvL to expand its carbon fiber product capability, the material of choice for wind turbine blades and aeronautical components. “We have seen tremendous growth in our current facilities near downtown. However, being spread over four buildings is inconvenient and inefficient. There is, physically, no more room for new employees,” said Oliver. “We are very excited about the move to Reynolds Village; we know this facility will allow us to meet our customers’ demands for years to come.”

Oliver’s vision for the company is that of a “1950s model” company that cares about its employees, gives back to the community, and produces exceptional products with integrity. “Oliver’s commitment to Asheville and Buncombe County is second to none. He chose Asheville as the place to create his dream company and we thank him for his continued vision and dedication,” said Bob Roberts, Chair of the EDC Board.

In AvL Technologies’ 15- year history they have become known for their technical excellence, innovative products, and an ability to meet demanding development and production schedules for a world-wide customer base. AvL antennas are used by customers such as the American Red Cross Disaster Relief Division, General Electric, the US Army, US Marine Corps, the White House Communications Agency, FEMA, and many foreign nations including Great Britain, Germany, France, Africa, India, Japan, Germany, and China, among others. Demand was immediate, for instance, after the recent earthquake disaster in Haiti.

AvL Technologies will begin renovations on the former Newbridge Shopping Center space in the coming weeks and hopes to move operations to the new facility by late summer 2010. Chairman of the Buncombe County Commissioners, David Gantt, adds, “AvL Technologies has rightfully earned an international reputation for its innovative products, world-class engineering and manufacturing staff and we are proud that the firm chose to expand here in its own backyard.” Employment inquiries and applications for AvL will be taken at the North Carolina Employment Security Commission offices beginning June 1.
Posted by AshevilleChamber at 3:12 PM 3 comments:

First Aid Auto, next to the Asheville Airport Shopping Center, will hold a free dent clinic on Saturday, March 20th from 9 a.m. to noon to demonstrate the latest techniques in paintless dent repair and to reverse the damages of a severe winter on your vehicle.

Drivers who have suffered minor damages will have their vehicles repaired free of charge. Light refreshments will also be served.

Based on more than two decades of vehicle repair experience, co-owner Doug Mielke will direct the clinic at 369 Rockwood Road in Arden, near the Crocker Barrel restaurant off Airport Road, adjacent to I-26. All staff members will participate.

The family-owned company is endorsed by more than 25 auto dealerships in Western North Carolina. Most FAA repairs are completed in two hours at modest cost and are covered by deductible insurance.

First Aid Auto is based in a modern 4,500 square-foot facility complete with a family entertainment center. There is ample parking available.

Please call 777-DENT to register and schedule your free estimate. Repairs will be made based on the order of estimates received.
Posted by AshevilleChamber at 3:08 PM No comments: