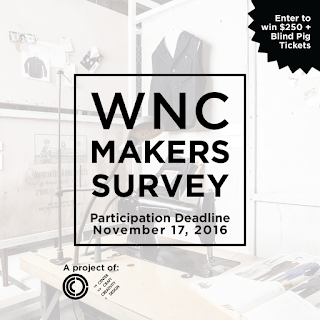 The Center for Craft, Creativity & Design (CCCD) and UNC Asheville recently partnered to launch the Center for Creative Entrepreneurship (CCE) in downtown Asheville. CCE will offer business workshops and classes designed specifically for makers and students with support from Mountain BizWorks.

CCCD seeks your input via a short 10-minute survey to ensure that programming is relevant to the WNC maker community.

As a special thank you, all participants will be entered for a chance to win a $250 Visa gift card and two tickets to a Blind Pig Supper Club event.
Survey Link: http://www.surveygizmo.com/s3/3028645/WNCMakerSurvey

Posted by Asheville Chamber at 10:23 AM No comments: 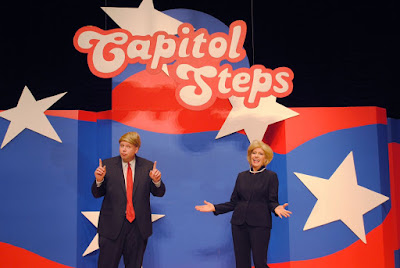 The Capitol Steps visit Diana Wortham Theatre just one week before the presidential election, bringing much needed comic relief with their witty, satirical show, What to Expect When You’re Electing: Saturday, October 29 at 8:00 p.m.

The Capitol Steps began as a group of Senate staffers who set out to satirize the very people and places that employed them. Born in December 1981 when some staffers for Senator Charles Percy were planning entertainment for a Christmas party, they decided to dig into the headlines of the day, and created song parodies and skits which conveyed a special brand of satirical humor. Taken together, the performers have worked in a total of eighteen Congressional offices and represent sixty-two years of collective House and Senate staff experience.

“The Capitol Steps combine music and comedy with current events and create a truly eclectic performance out of such serious material,” says John Ellis, Managing Director of the Diana Wortham Theatre. “With the upcoming presidential election, the Asheville area could use a few great laughs just one week before it’s time to cast a vote.”

Since they began entertaining, The Capitol Steps have recorded more than thirty albums, including their latest, What to Expect When You're Electing. They've been featured on NBC, CBS, ABC, and PBS, and can be heard twice a year on National Public Radio stations nationwide during their Politics Takes a Holiday radio specials.

Posted by Asheville Chamber at 10:18 AM No comments:

The Holiday Sip & Shop event at Grovewood Gallery will take place over two weekends: December 9 - 10 and December 16 - 17, from 10am - 6pm each day. During this special event, all gallery merchandise will be 10% off. Holiday shoppers can also take in craft demonstrations by local artists and enjoy complimentary wine, warm cider and cookies.

DEMONSTRATION SCHEDULE:
All demonstrating artists will have original works of art for sale (10% discount does not apply to demonstrators’ artwork or custom/special orders).

ABOUT GROVEWOOD GALLERY:
Grovewood Gallery, which will mark its 25th anniversary in 2017, is a nationally recognized gallery that showcases fine American art and craft. The gallery is housed in the historic weaving and woodworking complex of Biltmore Industries, located adjacent to The Omni Grove Park Inn in north Asheville. Free parking is available on-site.

Grovewood’s 11-acre campus is also home to Asheville’s only Antique Car Museum, the North Carolina Homespun Museum, Golden Fleece Restaurant, 9 working artist studios, and an outdoor sculpture garden. The property, with its six cottages built from 1917 - 1924, is listed on the National Register of Historic Places.

Posted by Asheville Chamber at 10:15 AM No comments: