Apartments with a view

A week or two ago we were invited out to tour the Cadence Village at Woodland Hills apartments in North Asheville. Cadence Village is located conveniently right off of 26 West at the New Stock Road exit just one mile from Weaverville.

The community is extremely nice with a great mix of residents ranging from working professionals, to families, and retirees. The selling points for me were:
You can learn more about Cadence Village at Woodland Hills on their website or stop in for a visit!

The pool ready for summer: 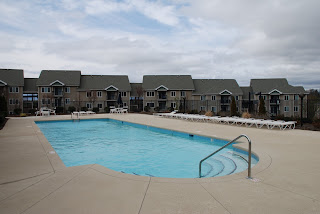 A pretty great view even for a cloudy day: 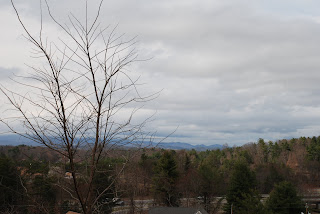 The apartments all seemed to be very spacious and included washers and dryers: 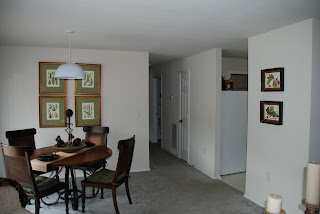 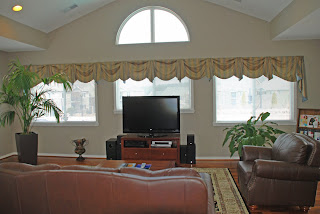 The Asheville Metro region was recently ranked by Forbes.com as #6 Best Metro Places for Business & Careers. Curious how we have stacked up in other rankings? You can access a list of other top rankings for the Asheville area by visiting the Economic Development Coalition’s website.

See the information on Asheville from Forbes.com. 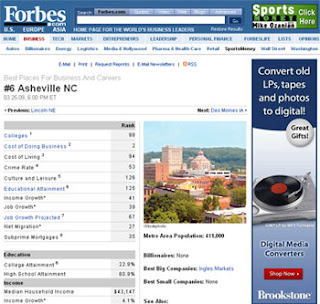 Posted by AshevilleChamber at 12:51 PM No comments:

The Asheville Regional Airport has announced new flights for the second time in the past week. Last week AVL announced flights with AirTran to Orlando, now Delta is offering daily flights to LaGuardia. Here is the official announcement:

“Passengers now have another option when traveling to New York with the return of non-stop flights to the “Big Apple”,” said David N. Edwards, Jr., A.A.E., Airport Director. “Asheville Regional Airport, with our partner Delta Air Lines is proud to bring this new service to the Western North Carolina community.”

“As we continue leveraging the opportunities presented by our merger with Northwest, Asheville will now see a direct benefit with new nonstop service to New York’s LaGuardia Airport and the opportunity to connect through our global gateway at John F. Kennedy International Airport to over 40 International destinations and five continents,” said Joe Esposito, Delta’s managing director of schedule planning.

Travelers can book their tickets now at www.delta.com and www.flyavl.com. Atlanta, Cincinnati and Detroit are other destinations currently provided by Delta out of Asheville. Asheville Regional Airport is also served by AirTran (beginning June 11th), Continental and US Airways.
Posted by AshevilleChamber at 11:33 AM 1 comment:

Strive Not to Drive has become an annual event that encourages people to avoid driving their car for one or more days during a specific week to experience the benefits and opportunities of walking, bicycling, riding the bus, carpooling, telecommuting, etc. This year Strive Not to Drive will be held during the week of May 11-15th; which is also National Bike to Work Week.

How can you help? It’s easy. 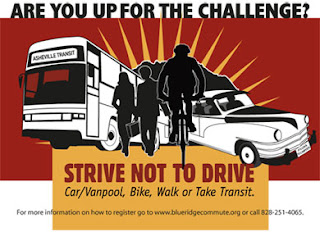 Posted by AshevilleChamber at 12:54 PM No comments:

Asheville to Orlando with AirTran

Just received this release from the Asheville Regional Airpot, great new flights to Orlando with AirTran:

The Asheville Regional Airport Authority is pleased to announce that AirTran Airways will begin new non-stop air service between Asheville and Orlando International Airport on June 11, 2009. Service will be operated using 117- passenger Boeing 717 jets. These jets will provide two classes of non-stop service to Florida where travelers can enjoy beaches and sunshine.

Introductory Sale Fares will begin at $69 and must be purchased by April 16, with travel completed by June 25, 2009. Travelers can book their ticket at airtran.com and flyavl.com.
Posted by AshevilleChamber at 11:16 AM 1 comment:

If you’ve been to Crowne Plaza lately, you’ve probably noticed that there are lots of changes going on. The golf course is being re-worked, there are new tennis courts in place (both indoors and outdoors) and there is a great new conference space. And when we say conference space, we mean 16,600 square feet. The entire back wall is full of windows, with views of the resort and mountains. They have plans to cover the 2,500 square foot veranda which would be a gorgeous setting for any event. Other amenities they showed us were the green room for speakers or performers, a great registration area with coat room, and the built-in audio visual equipment with recessed screens. We were very impressed! While we were there, one of the first events was happening and the staff was doing an incredible job with the event. They’re not quite sure how many folks the room can accommodate yet, but we guessed around 900 banquet style. 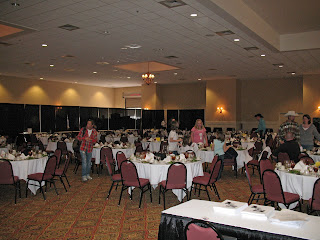 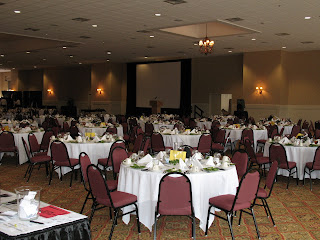 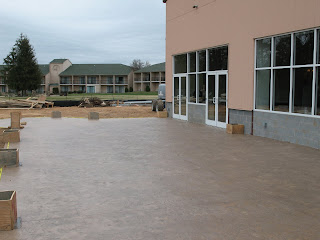 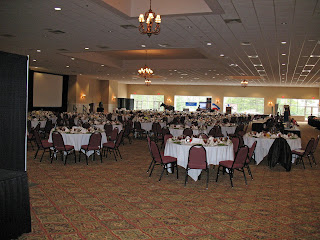 Posted by AshevilleChamber at 3:32 PM 3 comments:

Press Release from the Buncombe County Tourism Development Authority:
The Buncombe County Tourism Development Authority (BCTDA) announced today that it is awarding more than $2.6 million to five community projects and serving as a potential loan guaranty to one other through its Tourism Product Development Fund (TPDF). Funding will assist with construction of projects that are expected to further enhance the community while also driving more overnight hotel stays and pumping additional dollars into the local economy.

“While other funding sources are drying up, the tourism industry is working hard to continue to build this community,” noted Buncombe County Tourism Development Authority (BCTDA) Chair Ron Storto, vice president of hospitality development for Biltmore Farms, Inc. “The dollars we are pledging today are a much-needed shot in the arm during some particularly tough times.”

The BCTDA voted to award the grants during its most recent meeting, basing its votes on recommendations from the TPDF committee. Recipients of the 2009 funding cycle for the

Tourism Product Development Fund include:
In 2000, the tourism industry, and hoteliers, in particular, devised the idea to slightly increase the room tax in order to provide a funding source that could spur new projects that would benefit residents in the Asheville area, while generating additional room nights. With passage of the legislation in 2001, the room tax increased from three to four percent with the additional cent dedicated to capital projects. Visitors also pay state sales tax on their lodging.

“During the past eight years, the tourism industry has become one of the largest non-government funders of civic projects in Buncombe County,” TPDF Chair Todd Morse said. Morse, who is the principal of Chimney Rock Company and an original member of the TPDF, noted that nearly $12 million has gone directly back to community projects since the fund’s inception.

“The dollars spent today translate into jobs tomorrow,” added BCTDA Executive Director Kelly Miller, who also serves on Asheville City Council. “The tourism industry in this County has found a way to provide its own incentive and seed money to jump start projects that are good for the community and good for business. Residents benefit, but the projects will inject more outside dollars into the region, which fuels the entire economy,” he explained.

More than 2.9 million overnight leisure visitors travel to the Asheville area each year generating more than $1.8 billion in economic impact to the region.

In Buncombe County, our hospitality legacy is intertwined with our quality of life,” Storto said. “These are facilities and attractions that add to the visitors’ experience, but still serve the needs of residents of Buncombe County. They make us a more vibrant place to visit and a better place to live. “
Posted by AshevilleChamber at 11:57 AM 2 comments:

The Asheville Independent Restaurant Association got a 'taste' of the Asheville Convention and Visitors Bureau's Foodtopian Society campaign the other morning in a presentation by CVB staffers: Marla Tamballini; Dianna Jackson Pierce and Heather Backer. The campaign, which touts Asheville as a great culinary destination, includes a website; monthly e-newsletter and various forms of social media.

On March 11, The Lobster Trap launched its own line of microbrew beer, making it the 8th operating brewery (2 more are on the way) in the city of Asheville. The OysterHouse Brewery features four different beer styles and is only available at The Lobster Trap.

Visit The Lobster Trap online at thelobstertrap.biz or in person at 35 Patton Avenue, downtown Asheville!

Posted by AshevilleChamber at 8:24 AM No comments:

The Grove Park Inn Resort & Spa has just launched a new campaign centered around E.W. Grove's Magical Elixir 2.0. This seems to be a very different approach than GPI has taken in the past, much edgier! There has been much transition in the marketing department at the resort in the past six months and it is great to see some new projects launched.

Also check out the site centered around the campaign: grovesmagicalelixir.com

Last month the National Association of Clean Water Agencies (NACWA) handed out four awards at its Winter Conference in Atlanta. The Metropolitan Sewerage District(MSD) of Buncombe County was one of four agencies recognized with the Excellence in Management Award.

Here are a few facts about our own MSD:
The Chamber would like to congratulate the MSD of Buncombe County for their outstanding service to our community!

Interesting side note:
On a quick trip over to the MSD website, they actually have a virtual tour of the facility. See what happens to your waste every step of the way at msdbc.org! 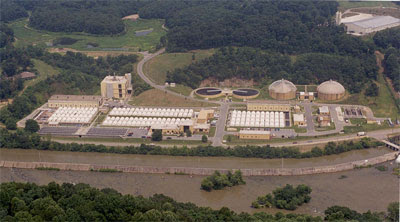 Posted by AshevilleChamber at 9:28 AM No comments:

Take Home a Taste of Foodtopia

The Chamber’s Asheville Shop has a growing collection of culinary treats from our local experts. Thanks to the Asheville Convention and Visitors Bureau efforts to market Asheville as the world’s first Foodtopian Society, Asheville's culinary expertise is being recognized nationwide. Visitors looking to bring some of our delicacies home with them can visit the Asheville Shop for a wide selection including honey, jam, and coffee from Tupelo Honey, barbecue sauces from E.D. Boudreaux’s, Chef Ricardo’s famous Appalachian tomato sauce, and much more. 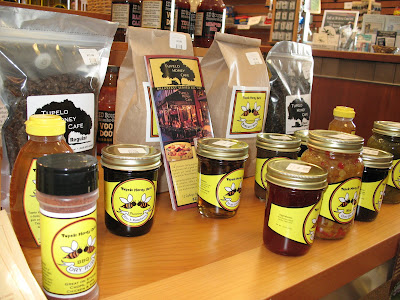 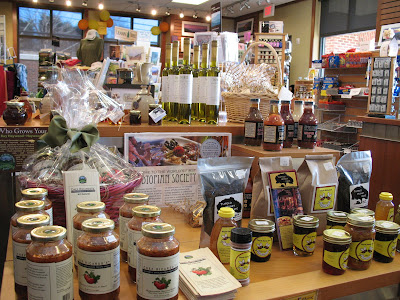 Posted by AshevilleChamber at 10:21 AM No comments: