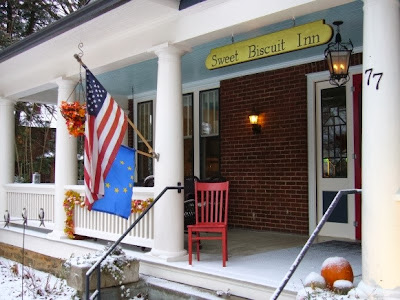 Where travelers once held photos of Flat Stanley in unusual places, photographers now shoot photos of a humble red chair.  Long considered simply a place to rest one’s buttocks, the lowly wooden chair has been elevated to celebrity status, and is being welcomed at inns and B&Bs throughout America.  It’s all part of a consciousness raising experiment among innkeepers, and during the Thanksgiving week, November 26 through 29, the chair is a guest in Asheville, NC and the Sweet Biscuit Inn.  Look for innkeepers Claudia & Christian Hickl shooting images of the Red Chair at the Vance Monument, before the backdrop of the Biltmore Estate and one of the numerous Asheville breweries, as well as the Sweet Biscuit Inn.

It all started in winter 2012 with a single image.  Woods Hole Inn innkeeper Beth Colt posted a picture on Facebook of her simple red chair perched on the ice behind her house and watched her page light up with “likes”.  The picture was shared on the Facebook page of Julie Ann Cromer, a photographer from Santa Barbara, CA, who was inspired by the image to visit the Woods Hole Inn and took an amazing second photo of the chair on a local beach. This inspired Colt to share the chair with other innkeepers, sending it on a journey through towns and villages throughout Cape Cod last spring and then throughout the six New England states last fall and winter.  As innkeepers all over New England were inspired by the chair, it has taken on a personality of its own.

“Now it’s time for the chair to branch out,” expressed Beth Colt.  “Innkeepers across the country are clamoring to host the chair, so it’s time to send it coast-to-coast in every corner of America the Beautiful.  There would be no Red Chair without the generosity of innkeepers and B&Bs.  It’s a barn-raising of sorts; the sharing of a piece of Americana,” concluded Colt.

Stories from the Red Chair’s travels have been chronicled on blogs at each stop throughout its journey.  Look for tales of the Red Chair’s travels to the Sweet Biscuit Inn on www.facebook.com/SweetBiscuitInn.  In a way, its innkeepers’ life story mirrors the voyages of the Red Chair.  “There are so many places across the globe we called home,” explained Christian Hickl.  “Before discovering the culturally eclectic and open-minded city of Asheville, we had lived in Germany, our country of origin, in New England, home to the Red Chair, and in Provence, France.”  Prior to coming to Asheville the Red Chair had found shelter in another North Carolina B&B, the beautiful Inn on Mill Creek in Old Fort, NC.  Its next stop will be Tennessee at the Creekwalk Inn in Cosby, TN. 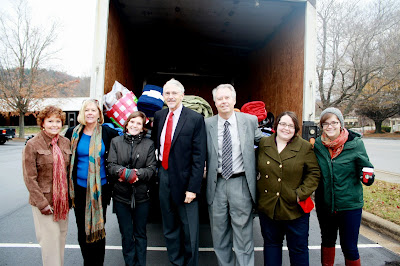 The company’s community initiative to help keep Asheville warm this winter was a two-part outreach program. ISA donated 288 brand new fleece blankets -- enough to cover every bed in ABCCM’s network of residential facilities the organization’s Veterans’ Restoration Quarters and shelters -- and held a community blanket drive. These two efforts netted more than 600 blankets and bedding items for ABCCM’s Crisis Ministry with generous contributions from local businesses and individuals.
Posted by Asheville Chamber at 10:10 AM No comments: 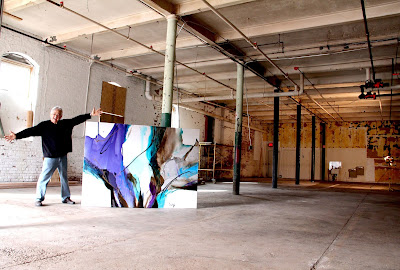 One of the amazing things about being an artist in Asheville is the tremendous synergies that are possible when creative growth aligns with a burgeoning business. New explorations in flow painting techniques and expanding work with larger canvases, on top of an already vibrant and extensive body of work, has turned Gerard’s Clingman Avenue location into a veritable cornucopia of color.

When it became obvious that his artistic imagination was bigger than the walls of Jonas Gerard Fine Art, the search began for an additional location.  After looking at many other areas around town, the perfect venue for expansion was found just a stone’s throw away in the River Arts District’s own Riverview Station. Currently housed there temporarily in studio #104, the Jonas Gerard Riverview Collection will move into its permanent 4,700 sq. ft. home in studio #144 in early 2014.

The new location will itself be a blank canvas for Jonas to explore the nature of creativity, light and color.  It’s large walls and performance space soon be filled with everything from his new flow paintings to landscapes, sunsets, large murals and steel sculptures. Together the Jonas Gerard Fine Art and Jonas Gerard Riverview Collection art spaces will house the fresh new creative rewards of a lifetime spent in art.

Currently located at 191 Lyman St., Riverview Station in studio #104, the Jonas Gerard Riverview Collection will move to it’s permanent home there in studio #144 in early 2014.

For more information, visit jonasgerard.com
Posted by Asheville Chamber at 9:57 AM No comments: