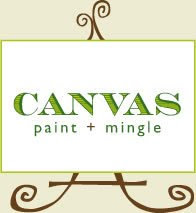 Canvas: Paint and Mingle is a fun, step-by-step painting class where adults and kids can walk out with their own fabulous artwork - no skills required. Grand opening is in West Asheville this coming Tuesday, November 2.

Canvas: Paint & Mingle to open in West Asheville on November 2, 2010. Now you can paint your own masterpiece and mingle with friends in super fun, instructor-led art classes in West Asheville. Owned by Anna Blair Publow and her husband Andrew, Canvas offers you the chance to explore you artsy side through two-hour, step-by-step paint classes. The schedule will always change but Canvas will offer evening classes for adults 7pm to 9pm during the week, classes for kids on the weekends and occasionally classes for adults weekday afternoons depending on demand.

“Canvas is an artistic and social outlet. We want people to relax and have a good time. It’s a wonderful way to celebrate your inner artist and spend a great evening with friends.”

Located in the heart of West Asheville at 735-C Haywood Rd. near West End Bakery, Westville Pub and the West Village Market and Deli, Canvas provides the supplies and asks you to BYOB and snacks.

Canvas will hold its first class on November 2 so you can register now at www.paintandmingle.com or call 254.4486.

“We are planning on hosting several classes benefiting local charities in the next few months including one for Arts For Life on November 9 and one for Meals On Wheels on December 3,” says Publow. “It will be a great way to celebrate our opening and to give back to the community.” Canvas is also available for private parties for birthdays, girls’ night out, bridal and baby showers and holidays.

"Painting skills are not required but the desire to have a good time is!" says Publow.

About Canvas: Canvas is a fun and relaxing, 2-hour, step-by-step painting class that gives adults and children the chance to create their own masterpiece in a social setting. Canvas is located in West Asheville at 735-C Haywood Rd. The schedule will change weekly but there will be evening classes for adults 7 p.m. to 9 p.m. during the week, classes for kids on the weekends and occasionally classes for adults weekday afternoons depending on demand. Supplies are included but it is BYOB and snacks. Register today at www.paintandmingle.com. For more information about Canvas, please contact Anna Blair Publow at 828.254.4486. 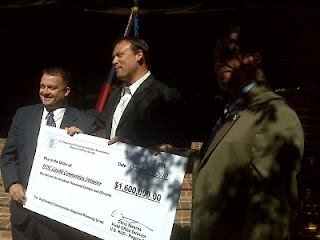 Mr. Stearns congratulated the Land-of-Sky Regional Council on their award that will fund the development of a regional plan for sustainable development. The plan will launch an unprecedented community outreach efforts, including the Asheville Area Chamber of Commerce, to reach the Region’s diverse, but interrelated rural and urban Appalachian communities. To develop the regional plan, Consortium partners will involve participation from populations that are traditionally left out of regional planning processes (including, but not limited to, rural mountain landowners, farmers, urban minority populations, small business owners, seasonal second homeowners, health care providers) to solicit their input and commitment to the planning process and the final plan.

The Chamber will continue to work with Land-of-Sky over the next several years to see this plan come to fruition.
Posted by Public Policy at 2:47 PM No comments:

Thank you to Clear Channel Asheville for hosting such a fun evening. Don't miss our next Business Before Hours at Biltmore Baptist Church on October 19 and Business After Hours at Sisters of Mercy South Asheville on November 4.

Check out images from the evening by clicking on this slide show. 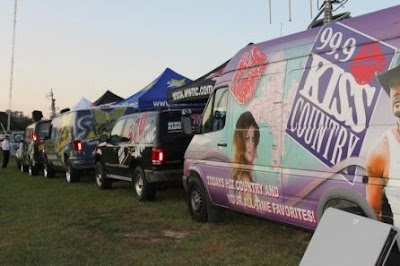 Posted by Roger OKelley at 1:31 PM No comments: 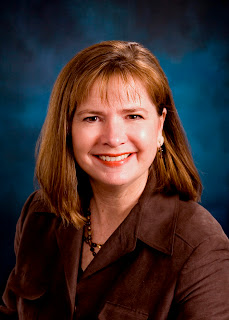 The Asheville Area Chamber of Commerce is delighted to announce the selection of its new President & CEO as Kit Cramer, current President of the International Downtown Association (IDA) in Washington, DC. Cramer will bring a wealth of experience to Asheville, as she was employed for 17 years in a variety of management positions with the Charlotte Chamber of Commerce, served as chief public information officer for two large school systems and is a former elected official. Cramer will assume her new role at the Chamber on November 15, replacing Rick Lutovsky who is retiring after 10 years as Chamber President & CEO.

Join us in welcoming Kit Cramer and thanking Rick Lutovsky.

Asheville, North Carolina—The Asheville Area Chamber of Commerce is pleased to announce the selection of its new President & CEO as Kit Cramer, current president of the International Downtown Association (IDA) in Washington, DC.

Alice io Oglesby, chair of the Chamber Board and president of io design and illustration, inc., reported that the Chamber’s Board of Directors approved the recommendation of the Search Committee to hire Kit Cramer at its called meeting on October 6. Cramer will begin work on November 15, replacing Rick Lutovsky who is retiring after 10 years at the head of the organization.

“Kit brings an excellent set of skills to the position,” said Mike Willett, Chair of the Search Committee. “During the interview process, we were impressed not only with the variety of professional experience she has to offer, but also her enthusiasm and obvious passion for Chamber work.”

“Asheville is a beautiful, exciting place. The diversity of thought there is one of the things I found most attractive about the community. I’m honored to have been selected for this position and am excited to get to work,” said Cramer. “Rick Lutovsky has built a strong and accomplished team. I look forward to getting to know them as well as the community as I work with the Board to take the organization to the next level.”

Cramer’s current organization, IDA, is a 650-member association with the mission of being a guiding force in creating healthy and dynamic city centers that anchor the well-being of towns, cities and regions throughout the world.

Prior to leading IDA, Cramer worked for the Charlotte Chamber of Commerce for 17 years in various management capacities, including as executive director of Member Services where she worked with the Chamber’s seven area chapters. As a Vice President in the Economic Development division, she worked as a recruiter for new business as well as an advocate for existing businesses. As group Vice President for Education, she worked on education public policy and workforce development initiatives.

Prior to her tenure at the Charlotte Chamber, she served as public information officer for two school systems. She also worked as a downtown manager early in her career.

While working in education public policy, Cramer also served as Vice-Chair of the Charlotte-Mecklenburg Board of Education for three years.

A graduate of the University of Florida with a degree in Journalism & PR, Cramer is a native of Jacksonville, Florida. She has received the Certified Chamber Executive designation from the Association of Chambers of Commerce Executives. She has been married to her husband, Mark, for 27 years. They have two grown children, Kathryn and Mac, who live in Charlotte.

Posted by Roger OKelley at 12:54 PM No comments:

Did you know that Western North Carolina has its own advertising club? The Asheville Chapter of the American Advertising Federation (AAFA) welcomes professionals from the communications, public relations and marketing industries. The ad club promotes the exchange of ideas, offers professional development through networking and expert speaking engagements, provides opportunities for submission to the nationally recognized ADDY awards program, and engages the community through public service, government relations and mentoring.
Check out the many events that the ad club has planned throughout the year on AAFAsheville.org. For a sneak peek at the activities of the ad club, take a look at the following video produced by Stone Digital Media:

Posted by Roger OKelley at 8:25 PM No comments: 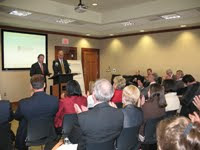 Local manufacturing company, Nypro, announced today that it is expanding its business to manufacture a new product, which means jobs for Buncombe County. Over the next three years, the expansion project will add 75,000 square feet of space to the plant in Vista Industrial Center and add 156 new high-wage production and engineering positions to its current workforce. Full press release below and on AshevilleChamber.org.

Asheville, NC – In conjunction with the NC Department of Commerce, Buncombe County, and the Economic Development Coalition for Asheville - Buncombe County (EDC), precision plastic products manufacturer Nypro proudly announces the expansion of its Asheville plant with an $83 million investment in facilities and equipment. Over the next three years, the expansion project will add 75,000 square feet of space to Nypro’s Buncombe County plant in Vista Industrial Center, and add 156 new high-wage production and engineering positions to its current workforce of 212 persons.

Nypro Asheville, which manufactures devices for the world’s leading healthcare companies, is making the investment in a unique industry alliance with Novo Nordisk to produce a next generation injectable insulin pen. According to Ray Grupinski, Nypro’s Group President, Healthcare, “This combined growth of Nypro with our customer Novo Nordisk is part of Nypro's partnership with our customer and our plan to expand healthcare plastics manufacturing at key sites around the world. Nypro has been part of North Carolina since 1987 and we are proud to be able to further North Carolina’s commitment to manufacturing employment.”

Chairman of the Buncombe County Board of Commissioners, David Gantt, commented, “We are truly honored by Nypro’s unprecedented commitment to re-invest and grow jobs here in Buncombe County. It is a powerful reminder of the unique and significant impact of manufacturing on our regional economy, and on the quality of life of our citizens and community. We thank Nypro management for their tremendous show of confidence, and pledge the full support of the County for their continued growth and viability in the years to come.”

“Since its arrival in Buncombe County over 20 years ago, Nypro has become known for world-class quality and innovation. Fostering the growth of our regional medical products manufacturers remains a strategic focus of the EDC and we are proud to congratulate Nypro on this milestone announcement. We are grateful for their continued commitment to grow highly skilled, high quality, advanced manufacturing jobs here in Buncombe County,” said EDC Chairman K. Ray Bailey.

Nypro Inc. is a global plastics manufacturer operating in 15 countries and based out of Clinton, Mass. The company makes plastic molded products for the healthcare, consumer, electronics and packaging markets. Nypro’s plastics and molds are used by companies all over the world. Nypro is one of the largest employee-owned companies in the world. For more information on Nypro, please visit www.nypro.com.

The EDC for Asheville-Buncombe County is a public-private partnership committed to: creating and retaining high quality jobs, community leadership, and being a resource for better business decisions. The EDC accomplishes this mission through its four core services: business retention and expansion, small business and entrepreneurship, research, and marketing and recruitment. The EDC is funded by Buncombe County, the City of Asheville, the Asheville Area Chamber of Commerce and the Advantage Asheville Campaign.

The Asheville Area Chamber of Commerce is a 2,000+ member organization representing 86,000 employees. Chamber members collaborate with community organizations and coalitions to support the community and each other with the mission of increasing the region’s livability by advancing its economic vitality. The Asheville Chamber works diligently to ensure that Asheville continues to prosper while also protecting the natural beauty of the area. In 2006, the Chamber moved to a new location and is now home to the 4,000 square foot Visitor Center which welcomes 200,000 visitors per year.

Posted by Roger OKelley at 7:32 PM No comments: