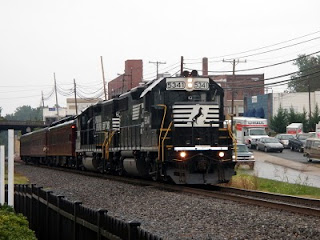 On Wednesday, September 8, 2010 two passenger rail cars with 140 riders departed from Asheville for Marion, North Carolina. This rare event was an initiative of Operation Lifesaver, a nationwidenon-profit public information organization dedicated to promoting train safety and ending collisions, deaths and injuries at places where roadways cross train tracks, and on railroad rights-of-way. 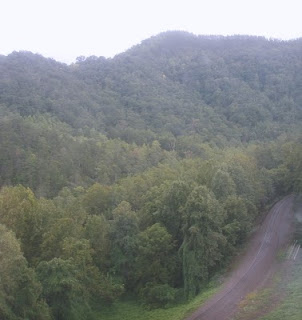 View of switchbacks going down to Old Fort

This educational opportunity was also a chance to experience passenger rail. The Western North Carolina rail corridor, which runs from Asheville to Salisbury, is scheduled by the North Carolina Department of Transportation to return passenger rail. This has been a goal of Amtrak and the NCDOT Rail Division and would bolster economic development in WNC. However, the state’s economy and budget have prevented the quick return of the service. 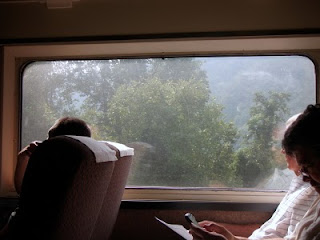 The excitement of the passengers could be felt as the train pulled out of Biltmore Village and began to make its way toward Black Mountain. Rail can be described as a romantic and nostalgic way to travel. It offers a unique and different perspective of North Carolina as the cars snaked down the switchbacks from Black Mountain to Old Fort. Riders were treated to views of wooded mountains free of the traffic of I-40. 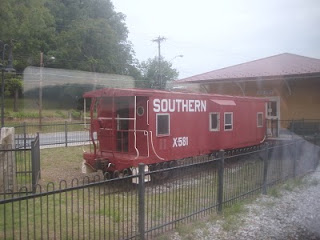 Pulling into station at Old Fort


Many individuals in Western North Carolina have been working to expedite the return of passenger rail. The Asheville Area Chamber of Commerce is a member of the Western North Carolina Passenger Rail Corridor, which is composed of members along the Asheville to Salisbury corridor that meet quarterly to bring passenger rail back to WNC. The group has presented to the North Carolina General Assembly and remains in contact with the NCDOT Rail Division to make sure the corridor remains top of mind. 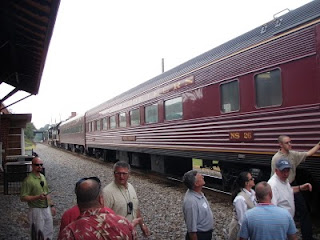 Boarding the train in Marion 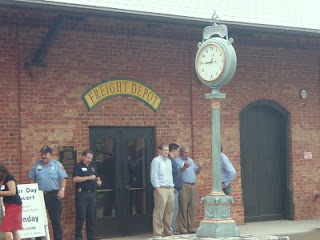 
An Operation Lifesaver volunteer said that the most important thing to remember is that trains can appear at any time. This is not only applicable for safety reasons as you traverse tracks on foot and in automobiles but also applies to passenger rail. The Chamber and many in the community are working hard to have this great mode of transportation return to our part of the state, and the passenger trains could appear at any moment. 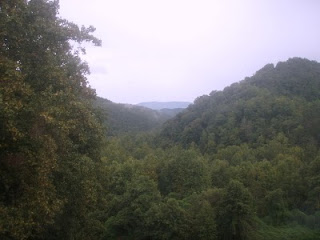