As the firm continues to expand its business and grow its network of branch offices in Hendersonville and the surrounding area, Edward Jones is hosting a recruiting event at 6:00 p.m. on Thursday, October 22 at 121 Main in Biltmore Park, RSVP REQUIRED.

"As we expand, we're looking to hire local candidates who fit in with the Edward Jones entrepreneurial culture, one in which high achievers who have a desire to run a business with the support of a much larger organization can serve clients and the communities in which they live and work," said Cawthorn.

Edward Jones, stresses the importance of meeting face-to-face with clients and providing them with the attention and guidance that they need and deserve.

Edward Jones financial advisors come from diverse backgrounds. Teachers, bankers and engineers all have joined the ranks of Edward Jones. They all, however, have one thing in common: They are self-starters who enjoy working with and helping other people.

The firm offers an extensive training program for new financial advisors. The firm is consistently recognized for delivering industry-leading training. Earlier this year Edward Jones was ranked No. 24 on Training magazine's "2014 Training Top 125" list its 13th consecutive year on the prestigious list.

As part of that training, Edward Jones financial advisors build their businesses by calling on people face to face in the communities where they have chosen to live.

If you would like more information on Edward Jones' recruiting event, contact Financial Advisor Roger Cawthorn at 696-0834 or toll free 1-866-696-0834 or visit the firm's employment Web site at www.careers.edwardjones.com.

Edward Jones, a Fortune 500 company, provides financial services for individual investors in the United States and, through its affiliate, in Canada. Every aspect of the firm's business, from the types of investment options offered to the location of branch offices, is designed to cater to individual investors in the communities in which they live and work. The firm's 14,000-plus financial advisors work directly with nearly 7 million clients. Edward Jones, which ranked No. 6 on FORTUNE magazine's 100 Best Companies to Work For in 2015, is headquartered in St. Louis. FORTUNE and Time Inc. are not affiliated with and do not endorse products or services of Edward Jones. The Edward Jones website is located at www.edwardjones.com, and its recruiting website is www.careers.edwardjones.com. Member SIPC.
Posted by Asheville Chamber at 3:33 PM No comments:

Asheville Gallery of Art will feature the work of Judy Rentner during the month of October. Her show, titled “Fall Light,” will feature Rentner’s landscapes in oil using the palette knife. 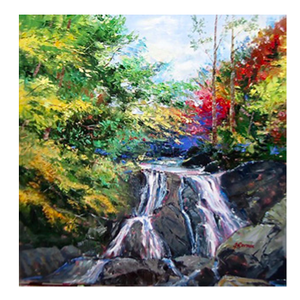 Her paintings are saturated with color and texture. “This exhibit reflects my excitement in painting the beauty of North Carolina, and I hope, through these creations, one can glimpse the Creator Himself,” she says.

The artist claims she had an insightful leap a few years ago that gave her a new perspective, a new way of seeing and doing things. “I began experimenting with the palette knife in my landscape paintings, and discovered it gave me a freedom of expression that was more spontaneous and passionate. It allowed for a purity of color, as well as more depth and contrast than I could ever achieve with a brush,” she says.

Rentner has lived in Western North Carolina for 16 years. She has painted in watercolors, acrylics, and oils, and has given workshops and demos in all those media. Over the years she has been an active member in several art organizations and has exhibited her work in shows and galleries.

Currently, the artist is a member of the Asheville Gallery of Art and also shows her work at the Twigs & Leaves Art Gallery in Waynesville, NC. The show will run October 1 to 31. The public is invited to the opening reception on October 2, 5 to 8 p.m., where they can view Rentner’s work as well as the works of the 27 other gallery artists.

Asheville Gallery of Art is located at 16 College Street, across from Pritchard Park in downtown Asheville. Regular gallery hours are Monday through Saturday, 10 a.m. to 5:30 p.m., and Sunday 1 to 4 p.m. You can contact the gallery at 828-251-5796, or visit their website

Posted by Asheville Chamber at 11:36 AM No comments:


Approximately 150 Tae Kwon Do practitioners of all belt ranks, from white to 4th Degree black belt, and ranging in age from 5 to 69, will compete for medals in three events: forms, sparring and board breaks. A panel of experienced black belts will judge the competition, including several Master Instructors (4th Degree black belt or above) from martial arts schools up and down the East Coast.

“As a leader in the marital arts community, Asheville Sun Soo Tae Kwon Do strives to create the greatest positive difference for the greatest number of people. Hosting our annual TKDI Invitational Tournament is just one way we’re bring together community members from around the country to help realize their true potential in a fun, healthy, supportive environment,” said Master Tony Morris, 7th Degree Master Instructor, founder and co-owner of Asheville Sun Soo Tae Kwon Do. “Sharing our love of Tae Kwon Do with martial artists from across the TKDI organization is an inspiring means of reinforcing our belief that everyone is capable of practicing excellence in every domain of their lives.”

Since January of 2007, Asheville Sun Soo Tae Kwon Do’s team of full-time professional staff has been teaching Traditional Tae Kwon Do, Hapkido and Jujitsu to men, women and children of all ages, currently ranging in age from 3-73. Asheville Sun Soo Tae Kwon Do has been voted #1 martial arts studio (for adults) and #1 martial arts program (for kids) in Mountain Xpress “Best of WNC” for several consecutive years, and once again in 2015.
Posted by Asheville Chamber at 10:36 AM No comments:


The Asheville Habitat ReStore is pleased to announce the winners of its fourth annual ReStore ReUse Contest. The entries, ranging from furniture to tiny houses and everything in between, were built using predominantly reused materials. The panel of five judges selected winners in four categories: Furniture, Homesteading, Live/Work Space, and Best in Show. On-line public voting determined the winner of the People’s Choice Award.


The winners are:
Furniture – Paige Liford Davis
Homesteading – Ferrin Cole
Live and/or Work Space – David and Kim Hostetter
Best in Show – Paul Willard
People’s Choice – Carla Berlin
More information about the winning entries can be found here on Habitat’s website and photos of all entries can be viewed in this FlickR album.

The purpose of the contest is to showcase innovative projects constructed predominantly of used building materials. Entries were judged on quality of design and execution; replicability of concept; clarity of description; and quality of photos. Winner received gift certificates to the Habitat ReStore.

“This is always such an enjoyable experience for me as I love to see how creative people are. The off-the-grid pool (winner in Live and/or Work Space category) was one of the most unique projects we’ve seen to date. Receiving an entry from an 11 year old (composter) was great too and has us talking about possibly adding a Youth category next year,” said judge and ReStore General Manager Scott Stetson.