At the 115th Annual Meeting, the Chamber honored nine community members with our annual leadership awards. This is the second installment in our series profiling the award winners.

John Miles of integritive, Inc. received the Small Business Leader of the Year in the category of 16 or more employees. The Small Business Leader of the Year Awards (sponsored by HomeTrust Bank) are presented each year to two individuals who reflect quality and dedication in their business operations and who have exhibited leadership accomplishments in the areas of innovation, initiative and civic responsiveness.
"John is a true renaissance man and has become a leader in the community, setting the bar for others to follow," said Andrew Nagle. 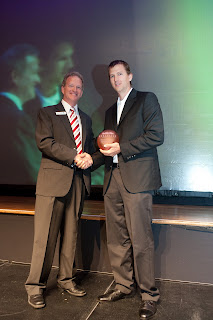 As CEO and "Chief of What's Next" at integritive, John routinely practices innovation and creativity and is driven by values in all he does.

John mindfully cultivates democracy in the workplace, encouraging collaboration. For the second year in a row, integritive has been recognized on the WorldBlu List of Most Democratic Workplaces alongside Zappos.com, New Belgium Brewing and WD-40.

"I'm always interested in how sharing professionally and personally with those around me can be of benefit to us all," John said.

Being involved in the community is important to John. He serves on the Board of the Asheville Chamber and the Executive Association of Greater Asheville as well as being involved in TEDx and other leadership and charitable programs. In addition, integritive donates 10 percent of net profits to community non-profits.

John said, "As a small business owner, I believe collaborating with other leaders in the community and supporting each other is critical for success."


John and integritive, Inc. previously appeared on our blog as Entrepreneur of the Month in April.