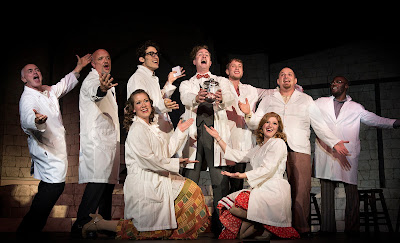 “Our 71st Season begins in a familiar way,” said Susan Harper, Executive Director. “We’ll open with a big musical in October and then present a family friendly holiday show in December. But after that, we’re forging into new territory.”

“I grabbed the LP of Sweeney Todd the second it hit the record stores in 1979. I knew I was listening to Broadway history by then and still - arguably - the most famous Broadway composer, Stephen Sondheim,” said Crouch. “Based on London's mythical murderous "boogie man" Sweeney Todd, The Demon Barber of Fleet Street, this mad musical comedy pulls out all the stops to scare, fascinate, and hypnotize audiences. I am honored to direct this musical masterpiece during the month of creepy goblins and dark shadows!”

Next on the Mainstage is the World Premiere of Snowbound, a new play written by Asheville native and winner of SART’s 2009 Scriptfest competition, Tom Godleski. The play will include original bluegrass music played live onstage by members of Buncombe Turnpike and Sons of Ralph.

“This play was such a joy to write that I don’t even remember sitting down to work on it,” said Godleski. “I have always wanted to write a Christmas song, and Snowbound inspired me to write two! I am honored and blessed that Asheville Community Theatre has chosen Snowbound for their 2016 season.”

In January of 2017, Asheville Community Theatre plans to close its Mainstage auditorium for much needed renovations. The project is expected to last approximately 6 months.

“We are so grateful to the leadership of the board and other stakeholders who built a permanent home for Asheville Community Theatre,” said Harper, speaking of the current space where ACT performs which opened in 1972. “We’re excited to upgrade and update the seating, the acoustics, the lighting and sound equipment, and more. We’ll be rearranging the seating to include aisles. A donor has pledged to loop the theatre so that patrons with hearing devices will be able to hear what’s being said without needing any additional equipment. Plus, the dressing rooms and the Green Room will get a full makeover. As any of our volunteers can attest, this is long overdue!”

During the time that the Mainstage is under renovations, the Mainstage season will continue. ACT has partnered with the UNCA Drama Department to co-produce Peter and the Starcatcher, which will be performed in the Carol Belk Theatre.

"The UNC-Asheville Drama Department and our students are excited to be collaborating with ACT on a joint production of Peter and the Starcatcher. Combining student and loyal ACT audiences in our unique space at the Carol Belk Theatre should produce a wonderful theatrical experience for all. We have had a professional relationship where many of our students have performed or worked backstage on productions at ACT and this gives us the opportunity to share our space with the ACT community," said Rob Bowen, Chair of the Drama Department.

The Mainstage theatre will reopen in August 2017 with Broadway's most Tony award-winning musical of all time, The Producers. It will also be helmed by long-time musical director, Jerry Crouch.

“Now that's the definition of a BIG Broadway musical! Where else can you see a swishing dancing Hitler ... grannies in a walker dance routine ... all packed together in a warm-hearted "bromance" based on a 1968 cult movie!” said director Jerry Crouch.

In 35below, a slate of shows has been selected that enables ACT to partner with other local theatre groups and producers. 35below is also host to two ongoing monthly shows: Listen to This, a storytelling series; and Olde Virden’s Super Happy Trivia Challenge, a live panel-style game show. 35below will continue to operate while the Mainstage undergoes the planned renovations.

“We are bursting at the seams,” explained Susan Harper, Executive Director. “So the time is right to expand.”

The growth in programming and audience numbers has ACT bursting at the seams. Over the past 6 years, ACT leadership has undertaken organizational analysis of operations and trends and developed a strategic plan designed to move ACT through the next 70 years. The result of the work done is exciting. Since 2009, ticket sales are up 62%, education programs have ballooned to accommodate 4,700 children and contributions are up 132 percent. Over 88% of the income at ACT is earned versus contributed.

Future plans call for the addition of a 150-200 seat black box theatre, expanded restrooms and additional offices. The Blomberg Building across the parking lot will become an education complex with additional rehearsal space. The expanded space will enable ACT to increase programming to meet community needs and in doing so, increase earned income to support operations.

“We’ve been in the quiet phase of a capital campaign for several months,” shared Harper. “Lead gifts are coming in from individuals, local businesses and foundations. And naming opportunities are still available.”
Posted by Asheville Chamber at 3:22 PM