Montford Park Players present "Much Ado About Nothing" 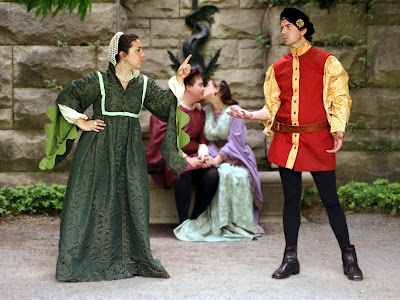 Montford Park Players, an Asheville theatrical tradition, is proud to announce their upcoming presentation of Much Ado About Nothing, one of William Shakespeare’s greatest comedies. The show will be directed by Artistic Director, Scott Keel, and will be presented at the Hazel Robinson Amphitheater, located at 92 Gay Street in the heart of the Montford region of Asheville, June 3rd through July 2nd. Performances will be on Fridays, Saturdays and Sundays, beginning at 7:30pm. All summer shows at the Amphitheatre are absolutely FREE to attend.

Montford Park Players, has been presenting Shakespeare and other classical works to the Asheville community since 1973, and has since grown to be one of Western North Carolina’s most beloved and well-known cultural attractions. They last presented Much Ado… in 2012, but are bringing it back for their 2016 season, as it has proven to be one of their most requested and popular shows.

Much Ado… is a broad comedy about sexual politics and is best known for its witty repartee between its two main characters, Beatrice and Benedick. When it was originally performed in the early 17th Century, it was immediately lauded as one of the best comedies of its day, and its popularity has spiked in recent years due to film versions by Kenneth Branagh and one by Joss Whedon.

This production will be directed by Mr. Keel. “I want to make this production as true to human nature as possible,” he says. “This play is funny, tragic, crazy, serious, silly, sexy, and incredibly intense. I want to make sure that each of these elements is honored in order to display what it means to be human.”

Montford Park Players is proud of this production and happy to continue to bring FREE Shakespeare in the park to our ever-supportive community.

More information regarding the show or advanced seating reservations can be made at montfordparkplayers.org or you can call them at (828) 254-5146.
Posted by Asheville Chamber at 12:31 PM