Tom Chalmers returns to star in "The Santaland Diaries" in 35below 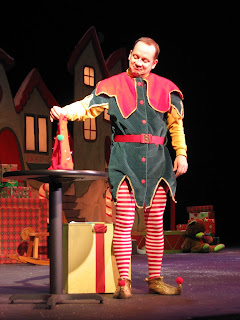 Tom Chalmers has been called up from the Elfin Hall of Fame to return to star in The Santaland Diaries, Asheville’s non-traditional tradition!

Chalmers performed the show to sold out crowds for seven years from 2005-2011. This is the 16th year in a row for the show, and it will be presented in its original Asheville location, the intimate 35below theatre. The Santaland Diaries will open Wednesday, December 13 and run through Sunday, December 17, 2017 with performances Wednesday-Saturday nights at 7:30 pm, Sunday at 2:30 pm and additional late night performances Friday and Saturday nights at 9:30 pm. Tickets are limited, and are available online at www.ashevilletheatre.org, over the phone at 828-254-1320, or in person at the Asheville Community Theatre Box Office. All tickets are $15.00.

The Santaland Diaries is a dark comedy that follows an out-of-work slacker who takes a job as an elf in Macy’s Santaland. His observations of the shoppers and employees are much more naughty than nice. In Asheville, the play has transformed from a quirky ticket to a bona fide holiday tradition – for 15 years in a row, performances have been at capacity.

“The Santaland Diaries and Asheville go so well together,” said Chalmers. “So when ACT asked if I would step in, I had to say yes. I haven't done the show for a handful of years and we won't be able to do all the bits we did when the show was upstairs and in full effect but the story always holds up and I will bring everything I can to the iconic comedic role that is Crumpet.”

Though Chalmers performed this role for 7 years, this will be his first time performing it in 35below, a space he knows well. Tom hosts monthly performances of Listen to This: Stories and More on Stage for years, and he teaches improv and acting classes in the space.

The Santaland Diaries is directed by Josh Batenhorst, who directed Chalmers in the show from 2005-2011. Batenhorst and Chalmers have continued to collaborate over the years, most notably as co-founders and performers with local improv troupe Reasonably Priced Babies.

For more information about The Santaland Diaries or about Asheville Community Theatre, please visit www.ashevilletheatre.org.

Posted by Asheville Chamber at 1:55 PM