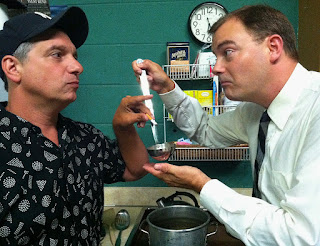 The award-winning American comedy The Odd Couple will open at Asheville Community Theatre on Friday, August 10, 2012 and run through Sunday, August 26, 2012 with performances on Friday and Saturday nights at 7:30 pm and Sunday afternoons at 2:30 pm.  Tickets are available online, over the phone, or in person at the Asheville Community Theatre Box Office.

“We’re advising patrons to start laugh-training now,” says Susan Harper, Managing Director or Asheville Community Theatre. “Because their abdominal muscles are going to get quite the workout at this show!”

The Odd Couple may just be the ultimate buddy comedy of all time. When fastidious Felix is thrown out by his wife, he moves in with his extremely messy friend Oscar. And hilarity ensues. Really- it does! Penned by Neil Simon, the master of American comedy, this show is truly textbook when it comes to smart quips and quick wits.  The Odd Couple premiered on Broadway in 1965, racking up a slew of Tony Awards including Best Actor in a Play (Walter Matthau), Best Author of a Play and Best Direction of a Play.  The play has also spawned several movie adaptations, a successful television series, a female version, and even a cartoon.  A who’s who of noteworthy comedians have filled the roles of Oscar and Felix, including Jack Lemmon, Tony Randall, Jack Krugman, Matthew Broderick and Nathan Lane.

Asheville Community Theatre’s production of The Odd Couple is directed by Adam Cohen who helmed last season’s classic comedy Arsenic and Old Lace.  Jeff Catanese, who is as skilled an actor as he is a director, stars as Oscar opposite Adam Arthur as Felix, who is making his Mainstage debut.  Also in the cast are Craig Justus, Betsy Puckett, Sara Fields, Walt Heinrich, Ben Puckett, and Walter Goodrich.

For more information about The Odd Couple or about Asheville Community Theatre, please visit www.ashevilletheatre.org.
Posted by Asheville Chamber at 11:54 AM