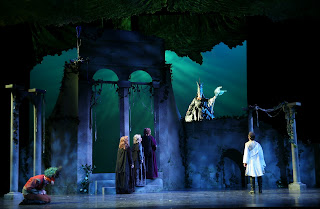 The Asheville Lyric Opera (ALO) is pleased to announce its 14th season for 2012-2013 which will feature three mainstage events and additional supporting programs throughout Western North Carolina.

Lawrence Brownlee in Recital (March 3, 2013 – 4:00 pm) Lawrence Brownlee is one of the most consistently sought-after artists on the international scene. He is lauded continually for the beauty of his voice, his seemingly effortless technical agility, and his dynamic and engaging dramatic skills.  We are honored to bring Mr. Brownlee to the Diana Wortham Theatre stage.

The 2012-2013 season features the debut of conductor Scott Schoonover.  Mr. Schoonover is best known for founding Union Avenue Opera in 1994.  He has led UAO to critical acclaim for the past 18 years in over 50 productions and 150 performances. Mr. Schoonover will conduct La Traviata.

ALO also welcomes new Chorus Master, Vance Reese.  Recently, Mr. Reese conducted the spring production of the Sound of Music.  As a vocal coach and accompanist for the ALO, Mr. Reese has a wealth of experience teaching, performing, and conducting.

On March 2, 2013, YMI Cultural Center will host a Lecture Master Class with Lawrence Brownlee followed by a private dinner.  The lecture will be open to local area youth.  For more information contact the opera office, 828-236-0670.

ALO offers season subscriptions with discounts.  Subscriptions are currently on sale through the opera office.  In addition to providing discounts, subscriptions allow patrons to choose their seats for the entire season with the option of renewing the following season.  Individual tickets for all productions go on sale July 16 with the prices for La Traviata, Lawrence Brownlee in Recital and Tosca ranging from $30 – $53. (Preview dress rehearsal tickets are available for student and senior citizen groups for La Traviata and Tosca.)  Student rates are available for all productions.

In addition to ALO’s three main stage events, the ALO continues to sponsor and support the Metropolitan Opera Live in HD movie broadcasts, shown at the The Carolina (Cinema) on Hendersonville Road. Highlighting its season are the Met’s new productions of Donizetti’s L’Elisir d’Armore, Verdi’s Un Ballo in Maschera,, & Rigoletto, and Wagner’s Parsifal.