Spoon River Anthology, a drama adapted for the stage by Charles Aidman (1925-1993) from poetry by Edgar Lee Masters (1868-1950), is scheduled for three matinee performances by The Autumn Players of Asheville Community Theatre (ACT):  Friday and Saturday, June 14 and 15,  in 35below at ACT; Sunday, June 16, at UNC Asheville's Reuter Center. Under the direction of RoseLynn Katz and in partnership with the Osher Lifelong Learning Institute, this is the fourth of five productions of the 2012-13 season of Readers Theatre Showcase. Curtain is at 2:30 pm. Tickets are $5 cash at the door. 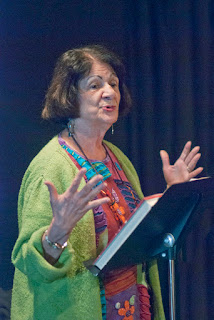 Spoon River Anthology opened at Booth Theatre on Broadway on September 29, 1963. It features a medley of characters from a small town in Illinois who tell their life stories after their lives are over.  Some tales are bold and colorful. Some are full of everyday frustrations. And, more than a few reveal long-kept secrets. It's classic 19th century Americana with folk singing and instrumental music.

Director RoseLynn Katz is also a playwright, actor, author, and storyteller. She wrote and stars as Dorothy Parker in The Devil Touched My Tongue and is preparing to produce her new play, A Peddler Knocked, in October.  Author of romance novels and a cookbook, she appeared in Shangri-la at The Magnetic Field and often appears with The Autumn Players where she is a member of the Steering Committee. Originally from Detroit, Ms. Katz was a children's librarian in Westchester NY prior to moving to Asheville in 2005 with her husband Gene.

The Autumn Players is ACT's volunteer outreach company consisting of over 100 seasoned actors, directors, writers and event organizers dedicated to taking theater into the community.  Since 1992, the company has provided entertainment, enrichment, and education for thousands of students, seniors, and in-betweens at venues within an hour or more from Asheville.

For more information or for a full schedule of the Readers Theatre Showcase series, please visit www.ashevilletheatre.org.
Posted by Asheville Chamber at 11:45 AM