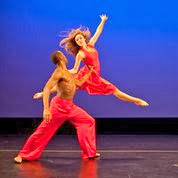 With virtuosic dancers and thrilling choreography, one of the nation’s premier contemporary dance companies Eisenhower Dance blends drama, momentum and force with technical brilliance in its performances at Diana Wortham Theatre on Friday and Saturday, January 17 and 18, 2014 at 8:00 p.m.

Founded by Artistic Director Laurie Eisenhower in 1991, Eisenhower Dance has been captivating audiences for more than two decades with an evolving, exhilarating repertoire dedicated to the performance of a diverse range of contemporary dance works.

In its January 17 & 18 performances at Diana Wortham Theatre, Eisenhower Dance performs the following works: Begin with the End in Mind, an abstract work by Ron de Jesus that showcases the dancers’ dynamic range, from soft and tender to powerful and athletic; Open Veins by Laurie Eisenhower, a virtuosic pure movement work; Threads, a luscious and passionate work for eight dancers—a signature work by Eisenhower Dance and an audience favorite; Music Lesson, a piece by Eisenhower that utilizes old recordings of narrated music lessons spliced with new music samples, giving a tongue-in-cheek version of music history and form; and Better Places, a crown-pleasing suite of five dances to Southern and Blues influenced music, also by Eisenhower. An additional work by a guest choreographer will be revealed at the performances.

Eisenhower Dance has received critical acclaim along with enthusiastic audience support from around the world, called “stunning” by the Holland Sentinel and acclaimed as “intelligently crafted repertoire” by Dance Magazine. The company has received numerous grants and awards for its work, including a prestigious Touring Award from the New England Foundation for the Arts (NEFA) to present its work NewDANCEfest during the 2012-2013 season. With support from the Michigan Council for Arts and Cultural Affairs, the company has also collaborated with Michigan Opera Theatre, the Warren Symphony, the Immigrant Suns, the Rackham Symphony Choir in Carmina Burana, and the Motor City Lyric Opera and the Toledo Opera in Amahl and the Night Visitors.

In addition to the public performances, Diana Wortham Theatre hosts Eisenhower Dance for an extended residency at the theatre. Activities include an after-school performance, “Kids in Motion,” on Wed., Jan. 15 at 3:30pm; a Master Class for the public on Thurs. Jan. 16 (location and time to be announced); a Matinee Series performance, “Motown in Motion,” on Fri. Jan. 17 at 10:00am; and a workshop at Care Partners. In addition, ticket holders of the Jan. 17 & 18 evening performances can attend free pre-performance discussions with Laurie Eisenhower and/or Eisenhower Dance dancers at 7:00pm both nights prior to the 8:00pm performances. All activities except for the Care Partners workshop are open to the public; more information at www.dwtheatre.com. Funding for the residency is made possible by South Arts.

Since founding Eisenhower Dance, Laurie Eisenhower has created over 100 dances for the company in addition to works for numerous professional and university dance companies. She has been awarded several Creative Artists grants from state arts foundations, the Michigan Dance Association Choreographers Festival Award, the Women in Art Award for Choreography, Artserve’s Michigan Governor’s Arts Award for Outstanding Michigan Artist and, most recently, the prestigious 2012 Kresge Artist Fellowship.

Eisenhower Dance’s Asheville performances are funded in part by a grant from South Arts in partnership with the National Endowment for the Arts and the North Carolina Arts Council; and presented with support from The Art Fryar Charitable Trust; and by Performance Sponsors Steve & Rena Hoffman, and by Mainstage Dance Series Sponsors Hedy Fischer & Rancy Shull, Tina & John McGuire, Ronna & Rob Resnick, BMW of Asheville, and Diamond Brand Outdoors; with additional support from Media Sponsors WNC magazine and WCQS 88.1FM.
Posted by Asheville Chamber at 2:52 PM