Twelfth with the Elf: "The Santaland Diaries" returns for 12th year at ACT 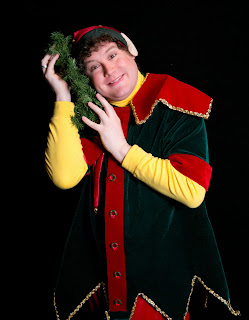 Asheville Community Theatre’s non-traditional tradition is back for its twelfth encore! This year’s production of The Santaland Diaries stars local favorite Bradshaw Call, who steps into the candy-cane striped stockings for the first time.

This year’s production of David Sedaris’ comic monologue has a multimedia focus that breathes fresh air into the modern classic script. The Santaland Diaries will open Thursday, December 19 and run through Sunday, December 22, 2013 with performances Thursday, Friday, and Saturday night at 7:30 pm and Sunday afternoon at 2:30 pm.  Tickets are available online, over the phone, or in person at the Asheville Community Theatre Box Office.  All tickets are $15.00.

The Santaland Diaries is a dark comedy that follows an out-of-work slacker who takes a job as an elf in Macy’s Santaland. His hilarious observations of the shoppers and employees are, quite frankly, more naughty than nice. In Asheville, the play has transformed from a quirky ticket to a bona fide holiday tradition.
Last year, producers across Western North Carolina sadly bid Bradshaw Call, a hugely popular actor, adieu when he left Asheville for a stint in Manhattan. He’s home for the holidays – and hopefully for much longer! – and The Santaland Diaries marks his first return to local stages since 2012.  Bradshaw’s local credits include Live From WVL Radio Theatre: It’s a Wonderful Life, Dashing Through the Snow, The 25th Annual Putnam County Spelling Bee, Greater Tuna, and Guys and Dolls.

For more information about The Santaland Diaries or about Asheville Community Theatre, please visit www.ashevilletheatre.org.
Posted by Asheville Chamber at 2:47 PM