MG Road announces the final flight of The Thunderbird - May 24th 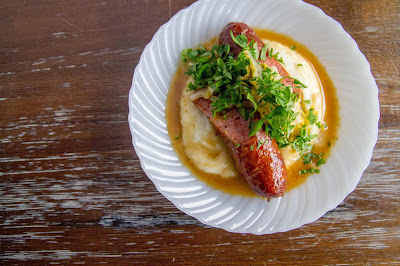 As planned, Moss will shift focus to final preparations for the much-anticipated, late-summer opening of Buxton Hall, a barbecue joint set to open in an incredibly renovated old-school skating rink in Asheville’s South Slope neighborhood that will spotlight whole hog, wood-fired barbecue.

“It has been beyond a pleasure to work with Elliott and his team throughout The Thunderbird’s residency here,” says Michael Files of MG Road. “Elliott and his core team of Sarah Cousler and Dan Silo took our pop-up program to the next level at MG Road and really helped reconfigure our identity to being not just an excellent craft cocktail bar and lounge, but a “culinary concert hall” of sorts, where one can always expect the food program to be doing something impressive and unique. We plan to continue to build on that, and Elliott will continue to have a hand in it even as he's knee deep in barbecue.”
The Thunderbird will be going out with a bang throughout Memorial Day weekend, culminating with the finale on Sunday, May 24, but the team at MG Road will soon introduce the next culinary takeover series to transform the eclectic lounge.

“We are super excited about our plans for the summer, but we don't want to let the cat out of the bag just yet. Let's just say that Elliott is going to leave us with a little gift before he heads out,” Michael continues. “We also will have the pleasure of continuing to host Sarah Cousler for a few more evenings of “Girls on Deck” as well as Dan Silo for more “Sausage Parties” before they are swamped with hog, so look out for those too.”

Stay tuned for the official title of MG Road’s exciting summer fling and all of its juicy details. Until then, the MG Road team encourages hungry locals and visitors to get their fix of Elliott’s eccentric Southern dishes at The Thunderbird until Sunday, May 24, 2015, with special happenings occurring throughout Memorial Day weekend. Let the countdown begin.

Posted by Asheville Chamber at 2:27 PM