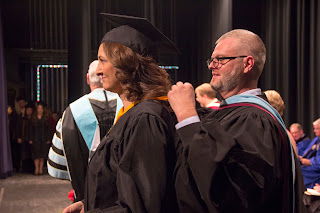 Mars Hill University honored 67 students who completed their graduation requirements during the summer or fall of 2016 during its commencement service Friday evening, December 16, 2016. The graduates included Mars Hill's first students to receive their bachelor of science in nursing (B.S.N.) degrees.

"Mars Hill has taught me that just living and surviving in this world is not acceptable; we must find ways to live as part of a world community that sees every soul and every culture as important," said Daniel Godfrey, a religion major from Monroe, N.C., who was one of the student speakers on the program. Adult and Graduate Studies graduate Jessica Anne Bolet, a business management major from Arden, N.C., also spoke; as did Stephanie Silver Shelton of Mars Hill, N.C., who gave the invocation. Shelton is one of the three nurses who completed the R.N. to B.S.N. (registered nurse to bachelor of science in nursing) program through the university's new Judge-McRae School of Nursing. (Shelton also is Mars Hill University's director of medical services.) Music education major James Brett Anderson of Weaverville, N.C., presented a musical selection on the euphonium.

Keynote speaker for commencement was one of the namesakes of the nursing school, Rev. Linda Judge-McRae. Judge-McRae and her husband, Norman McRae, made significant contributions to the effort to start Mars Hill's nursing program. The McRaes are Mars Hill graduates who own and operate Caris Healthcare, a hospice care provider based in Knoxville, Tenn.

Judge-McRae talked of teachers and public figures who were influential in her life, and through their examples gave the graduating class encouragement for their post-college lives. Quoting her high school Latin teacher's refrain that, "The least you can do is the best that you can," Judge-McRae challenged the students to persevere, even through life's difficulties. "But I do know this... and I know it with great confidence: that we worship a God of second chances, and there's a chance for me to do my best, be my best, and give my best in the days that follow," she said. "And I challenge you, graduates, to do the same -- it's the least you can do."