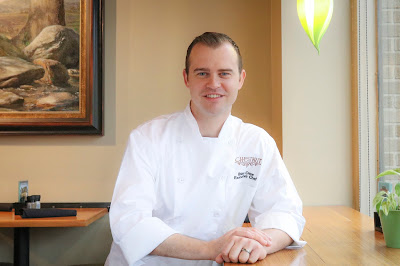 Westmoreland & Scully is proud to announce Brian Crow as the new Executive Chef at Chestnut (48 Biltmore Ave.) Brian has worked in a variety of locations, gaining valuable Executive Chef credentials at Devil’s Food Bakery & Cookery and at Bacon Social House.

Brian started work at The Corner Kitchen. There he met with creative challenges and a measure of culinary expression. “It was truly the cornerstone of my career, as it really challenged me and taught me to be a well-rounded cook.  I distinctly remember thinking, ‘This is my kind of cuisine and restaurant.’ It was there that I had the opportunity to cook for the President of the United States and First Lady, Barack  and Michelle Obama!”

After graduating from culinary school, Chef Crow landed a sous chef position at The Grove Park Inn, a four-diamond property, working under a Thomas Keller alumnus. “During my time at GPI, I really developed my attention to detail, learned to appreciate local and seasonal ingredients, and enhanced my leadership skills.”

In August of 2011, Brian and his wife moved to Denver in hope of finding new opportunities. At 24 years of age, Chef Crow landed as Executive Chef at Devil’s Food (DF) Bakery & Cookery. “Being so young, I didn’t think I was ready to be chef but my wife gave me the confidence to do so and it propelled my career in many ways. At DF, I created locally inspired, seasonal menus where I received many accolades in my four-year tenure.”

Taking the next logical and fortuitous step, Brian was able to collaborate with the owner, architect and contractor in a project called Bacon Social House. “It was a unique opportunity, where I was able to bring everything into fruition.” Brian continued to gain recognition as a “culinary game-changer” in Zagat Magazine and as one of the “top 30 chefs under 30 in Colorado”. Bacon Social House also received many “Best of” awards. At Bacon, Chef Crow was able to learn more about running/operating a business, the financials and bringing a team together.

Brian is excited to take on the role of Executive Chef at Chestnut. “Reuniting with a family that I have worked with in the past was something I could not pass up. I firmly believe in Chestnut’s core values and culture and feel blessed to be walking into such an amazing opportunity."

Posted by Asheville Chamber at 11:49 AM