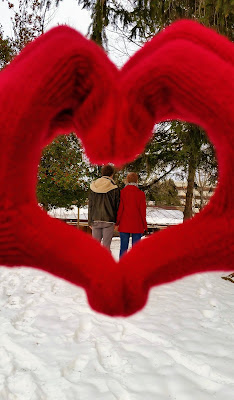 Reeni Lindblom Dowd, in association with Asheville Community Theatre is thrilled to bring Almost, Maine to Asheville's 35below Theatre this February, just in time for the loveliest holiday of all.

“On a cold, clear, moonless night in the middle of winter, all is not quite what it seems in the remote mythical town of Almost, Maine. As the northern lights hover in the star-filled sky above. Almost's residents find themselves falling in and out of love in unexpected and often hilarious ways. Knees are bruised. Hearts are broken. But the bruises heal and the hearts mend – almost – in this delightful midwinter night's dream.” - The Dramatists Play Service

This production will star four of Asheville's local actors; Ellen Soderberg, Dylan Murray, Heather Nicole Bronson and John O'Neil. “I got the dream team of casts. They all have their own styles and strengths and having them all agree to take on this project with me was truly exciting” says director and producer Reeni Lindblom Dowd. “Coming from an Improvisation background out of Chicago's Second City, I knew I wanted to start with this play.”

Almost, Maine is a series of nine short scenes, “so the actors need to be very energized and able to switch to an entirely different character in a moment”, explains Dowd. For Dylan Murray, that was a huge draw to the production. “The chance to play multiple characters within the same show that are clearly defined from one another is a challenge as an actor that Almost, Maine offers. I am ecstatic to be given the opportunity to be a part of this production.” For others it was the material. “I've always been obsessed with love stories, but rarely encounter stories that are relatable or speak to me. So much of theatre is centered on big, flashy musicals and it is nice to encounter a play that is simple and sweet” says Bronson. “In a world fueled by hate, this show is a refreshing change of pace and reminds me that love is so powerful.” And for others, it was personal, “...after focusing on film for a long while, I knew it was exactly what I needed next. The smallest of theaters, the most real of dialogue, and the most honest of feelings.” says Soderberg.

With Valentine's Day approaching, it always brings up the question of love and where you are going to get it from? “Watching all of these couples fall in, struggle through and fall out of love throughout a single night is so entertaining and thought provoking...it makes you laugh, cry and think about your own love in one sitting”, says O'Neil. What a better way to celebrate this romantic season than being surrounded by the idea of real love with this real romantic comedy.

For tickets or information about Asheville Community Theatre, please visit www.ashevilletheatre.org.
Posted by Asheville Chamber at 10:14 AM