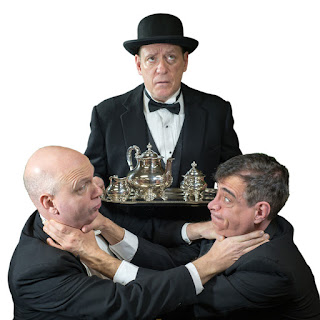 North Carolina Stage Company (NC Stage) is excited to present the next play by Margaret Raether of her P. G Wodehouse adaptations, Jeeves In Bloom.

Last year, Jeeves Intervenes proved a smash hit for NC Stage. After breaking every box office and attendance record in its 15-year history, the wonderful works of Wodehouse will once again take over their stage.


Actors Michael MacCauley and Scott Treadway will reprise their roles as the delightful duo of Jeeves, a proper valet, and Bertie Wooster, the “doltish” yet loveable English gentleman. Charlie Flynn-McIver, Callan White, and John Hall will all be returning actors in this new Wodehouse story but taking on new characters. The cast is rounded out by Trinity Smith and Strother Stingley, new to NC Stage’s Wodehouse productions but long-time alums of NC Stage.


This production is directed by Angie Flynn-McIver, Founder and Producing Director at North Carolina Stage Company. She also directed last year’s Jeeves Intervenes. “As a director, it’s always a special treat to get to spend more time with characters you know so well. I can’t wait to see what this cast dreams up!”


The lovable Bertie and faithful valet, Jeeves return! The pair pay a visit to the English countryside where Bertie’s amphibian-loving school chum, Gussie, hatches a plan to win the heart of the fanciful Madeline Basset. Bertie’s plan for a peaceful getaway is dashed when Aunt Dahlia attempts to commit burglary, Gussie’s attempt to woo Madeline backfires, and a disgruntled French chef seeks revenge on Bertie. In the midst of such mayhem, there is only one man who can set everything straight: Jeeves!

Written and adapted by Margaret Raether, and based on the classic stories by novelist P.G. Wodehouse, this story is bound to capture the audience with its British drawing-room humor.

Posted by Asheville Chamber at 10:17 AM