As one of the leading interpreters of swing and stride piano, Judy Carmichael infuses the classics with a fresh, dynamic interpretation of her own when she brings her trio to Diana Wortham Theatre, Saturday, January 21, 2017 at 8:00 p.m.

Grammy nominated Judy Carmichael is a commanding player of this technically and physically demanding style of jazz. Carmichael was nicknamed “Stride” by the great Count Basie for her expertise in the genre and she is one of a handful of musicians that approaches jazz from a perspective regarding its entire history. BBC radio says “…she’s a player of extraordinary accomplishment who has made stride piano relevant again.” Carmichael’s latest project, I Love Being Here With You, is her first all vocal CD and boasts an all-star lineup. 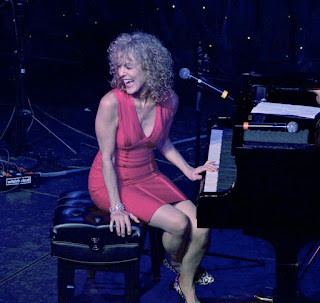 For its Asheville performance, Judy Carmichael brings her trio to Diana Wortham Theatre for an evening of juicy ballads, Broadway standards and stellar musicianship. Rounding out the trio is Harry Allen on tenor sax and Chris Flory on guitar. Harry Allen is a Gold Disk award winner and has toured or recorded with John Pizzarelli, Tony Bennett and John Mandel.  Chris Flory was guitarist with the late great Benny Goodman for several years and has recorded on over 50 recordings.

Judy Carmichael has written two books on stride piano and numerous articles on the subject,  and is one of the few jazz pianists honored as a Steinway Artist. In addition, Carmichael has done comic skits and performed her music on radio and television, and has performed private recitals for everyone from Rod Stewart and Robert Redford to President Clinton and Gianni Agnelli.  Celebrating her fifteenth year producing and hosting her public radio show Judy Carmichael’s Jazz Inspired, Carmichael broadcasts on over 170 stations throughout North America and abroad and on SiriusXM NPR NOW Channel 122. Ms. Carmichael has appeared frequently on Garrison Keillor’s A Prairie Home Companion, and has been featured on NPR’s Morning Edition, Entertainment Tonight, and CBS Sunday Morning.

The entrance for the Diana Wortham Theatre is marked by the location of the theatre’s marquee between 12 and 14 Biltmore Avenue.  Patrons enter the theatre through the breezeway between Marble Slab Creamery and White Duck Taco, and into a large interior courtyard with multiple glass doors, which lead to the theatre’s lower lobby and box office.  The intimate theatre seats just over 500 and boasts exceptional acoustics and sighlines, making it the premier performance space in Western North Carolina.  The Mainstage Series is supported by a grant from the North Carolina Arts Council, a state agency.  The Mainstage Series 2016/2017 Season Sponsors are the Asheville Citizen-Times, Blue Moon Water, Creative Energy, 67 Biltmore Downtown Eatery & jCatering, the North Carolina Arts Council, and the Renaissance Asheville Hotel.  To obtain more information on the Mainstage Series or to purchase tickets, call the theatre’s box office at (828) 257-4530 or visit www.dwtheatre.com.
Posted by Asheville Chamber at 11:10 AM