Walter Ziffer, noted theological scholar and retired religion professor at Mars Hill University, will deliver the keynote address at the university's spring commencement. The ceremony begins at 9:30 a.m. on Saturday, May 13, 2017, in Moore Auditorium, and will be streamed live on the internet through the university website. The topic of Ziffer's talk will be "The Choices We Make Have Consequences." 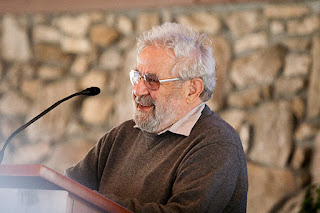 Ziffer was born in what is now the Czech Republic. His father was the last president of his community's Jewish congregation. In 1942 the community's 1,000 Jewish residents were taken to Auschwitz, and only a few survived. Ziffer lost 14 family members in the Holocaust, and he was shuttled among seven Nazi forced labor and concentration camps until he was liberated by Soviet forces in 1945.

He moved to the United States in 1948, completed high school and then earned an engineering degree from Vanderbilt University and began working for General Motors. In the early 1960s he returned to school, earning two master's degrees from the Graduate School of Theology at Oberlin University, and later a doctorate of theology from the University of Strasbourg, France. He taught in theological seminaries in France, Belgium, and the United States before retiring in 1985. In retirement, he continued teaching at seminaries and universities in Maine and North Carolina, including Mars Hill, where he taught in the department of religion and philosophy from 2002 until 2009.

An authority on the Holocaust, Judaism, early church history, and interfaith dialogue, Ziffer is the author of many journal articles and three books. His most recent book, "Confronting the Silence: A Holocaust Survivor's Search for God," was published last month by Dykeman Legacy Press. He lives in Weaverville, North Carolina.

Mars Hill University is a premier private, liberal arts institution offering over 30 baccalaureate degrees and master's degrees in elementary education and in management. Founded in 1856 by Baptist families of the region, the campus is located just 20 minutes north of Asheville in the mountains of western North Carolina.
Posted by Asheville Chamber at 11:05 AM