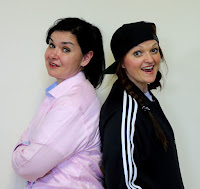 
The play first premiered in 2003, starring the authors and actresses Mindy Kaling and Brenda Withers. Written to be performed by two actresses (the playwrights originated the title roles), Matt & Ben purports to depict the relationship between Matt Damon and Ben Affleck in 1995, when the two were struggling actors. The play’s absurdist premise has the “Good Will Hunting” screenplay — for which Damon and Affleck, in real life, won an Oscar — dropping from the sky, flummoxing the buddies. In reality the screenplay might not have appeared right out of thin air, but the play takes audiences through a fantastic journey of what if it did. Matt and Ben spend one long Saturday in Somerville fighting, reminiscing, and hallucinating a lot more than normal when confronted with the screenplay they already know will change their lives. Matt & Ben is one wicked funny show that will make an audience feel like they're right in the same living room as these young Boston boys (played by girls).

The writers: Mindy Kaling is an actress, comedian, writer and producer. She is a New York Times best-selling author and can be seen on her primtime televsion show, The Mindy Project (Fox), in which she not only stars, but also created, writes, and executive-produces. Ms. Kaling was most recently seen on the eighth season of The Office (NBC), in which she starred as “Kelly Kapoor.”

Brenda Withers is a writer and actor. She is a founder of both the Harbor Stage Company (Hedda Gabler, CHURCH) and Lucid Theater (My Heart Split in Two, The Macguffin?), the co-writer of Matt & Ben (PS 122), and a former playwriting fellow of the Camargo Foundation in Cassis, France.

The actors: Anne Thibault (Matt) has worked professionally as an actress, playwright, and director for over twenty years.  She toured with the National Shakespeare Company for three years as Lady M and Lady Capulet, among others.  Other regional credits include acting work at the North Carolina Stage Company (Jane/THIS, Maureen/The Beauty Queen of Leenane, Catherine/Proof, Fay/Loot, and the one woman show The Syringa Tree), as well as several seasons at the Fairbanks Shakespeare Theatre. Other regional work includes the White River Theatre Festival, the Theatre at Monmouth, the Clarence Brown Theatre, the Fulton Opera House, the Boston Peabody and more.  Internationally she has performed at the Salzburg Seminar, Castello de Sannicandro di Bari, AKT-ZENT in Berlin and at the GITIS School is Moscow. In New York, she has appeared off-Broadway in The Seagull, the New York International Fringe Festival, and in several plays by Noah Haidle at HERE.  Work in television and film include the independent film Waterville, Comedy Central's Strangers with Candy, and Signe Bauman's Birth.

Laura Rikard (Ben) is a stage and film actress as well as director, acting coach, stage moment specialist, devised theatre artist and public speaking consultant. After graduating from the College of Charleston with a BA in theatre, she moved to New York where she worked in theatre and continued her training with the Actor’s Studio. In New York she worked at LaMAMA, ETC, New Perspectives Theatre and appeared at Carnegie Hall. She also lived and performed in Europe.  She studied Commedia dell’Arte with master teachers Antionio Fava and Carlos Garcia, physical theatre in Denmark with Odin Teatret, and received a Master of Arts from Paul McCartney’s Liverpool Institute for Performing Arts where she performed onstage with Sir Paul McCartney.  After her work in Europe she attended the University of Virginia where she received her Master of Fine Arts in Acting.  She has performed in film, television, commercials and regional theatre.

Tickets are available by calling 828-239-0263 or visiting us online at ncstage.org
Posted by Asheville Chamber at 11:20 AM