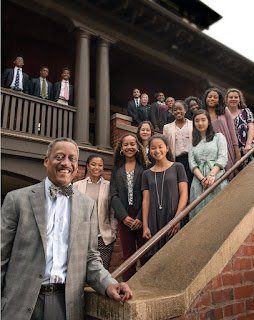 In recognition of the school's 50th anniversary of racial integration, Asheville School will host three dynamic speakers who will discuss multicultural issues of today with our students, faculty members and alumni.

The first of those speakers will be Gil Prince, who will talk about his time as a student and the meaning of this milestone during a convocation honoring his, McDonald’s, and DuPree’s contributions to Asheville School.

In 1967, the three young men enrolled in the ninth-grade. They came to Asheville School through the Stouffer Foundation, founded by Anne Forsyth with the mission to racially integrate elite southern preparatory schools. The Stouffer Foundation operated from 1967 to 1975 and helped 142 students gain admission to prep schools across the southeast.

Prince recalls being a part of the Stouffer Foundation’s first class of students. “We were part of a group of 20 kids selected by the foundation to make a difference in race relations in the country through admission to these segregated schools,” he said. “We were carrying a huge burden, representing ourselves and our family and an entire race of people. That is big when you are 13 years old.”

DuPree ultimately left the school before his graduation, but all three young men left their mark on the school and paved the way to make Asheville School the place it is today.

By graduation in 1971, McDonald had served as captain of the varsity basketball team, served as a student leader, earned several of Asheville School’s top academic honors and was a Commended National Achievement Scholar.

Prince was elected captain of the varsity football team and earned All-Conference and All-Buncombe County honors in football, served as a student leader and the president of Asheville School’s student council, earned several of Asheville School’s top academic honors, was a National Achievement Scholarship Program Semifinalist, and graduated as valedictorian of the class of 1971.

These accolades were hard earned. It was through these students’ persistence and dedication that the way was paved for future generations of a more diverse and inclusive culture at the school.

“As I reflect on what happened over the past 50 years, it seems to me it was the start of what we have seen grow into an inclusive culture,” Prince says, “not just racially but also in terms of gender and nationality as well. [Asheville School’s] inclusive culture has made us a stronger institution and has increased both the vibrancy of our community and the breadth of learning capacity of the student. We are more culturally intelligent, and that all started 50 years ago.”

Prince has gone on to serve several terms on the Asheville School Board of Trustees. On the Board since 1994, he continues to serve today. He was the chair of the Board of Trustees from 2009 to 2014 and received the Heedy Award in 2015 for his outstanding contributions to the school.

Asheville School will also host Dr. Christine Darden and Richard Blanco later in the year. Both will address the school community about varying multicultural issues of today.

On January 15, 2018, Asheville School will host Dr. Christine Darden, who retired as a member of The Senior Executive Service from NASA Langley Research Center after nearly 40 years of service. In her talk, “From Monroe, NC to NASA,” Dr. Darden will share her life story and career.

She was recently included in the book “Hidden Figures” by Margot Shetterly as one who stood on the shoulders of Katherine Johnson, Dorothy Vaughn, and Mary Jackson, who were featured in the 20th Century Fox movie of the same name.  Dr. Darden has been recognized with dozens of awards and honors, including two NASA Medals—one for her work and leadership of the Sonic Boom Program, and the other for her active involvement in working with and encouraging students to pursue careers in math and science. In addition, she received the Black Engineer of the Year Outstanding Achievement in Government Award and the Women in Science & Engineering Lifetime Achievement Award.

On April 26, 2018, Asheville School will host Richard Blanco for the annual Asheville School Founders’ Day Convocation. Blanco is the fifth poet to read his work at a United States presidential inauguration. He is the youngest, first Latino, immigrant, and gay person to serve in such a role. Born in Madrid to Cuban-exiled parents and raised in Miami, the negotiation of cultural identity and place characterize his body of work.

He is the author of three poetry collections: “Looking for the Gulf Motel,” “Directions to the Beach of the Dead,” and “City of a Hundred Fires;” and two memoirs: “The Prince of Los Cocuyos: A Miami Childhood” and “For All of Us, One Today: An Inaugural Poet’s Journey.” The University of Pittsburgh Press has published the commemorative chapbooks “One Today,” “Boston Strong,” and “Matters of the Sea,” the last of which Blanco read at the historic reopening of the US Embassy in Havana. In 2015, the inaugural poem “One Today” was released as a children’s book, in collaboration with the renowned illustrator, Dav Pilkey.

Posted by Asheville Chamber at 10:07 AM