The Liston B. Ramsey Center for Regional Studies at Mars Hill University has announced that traditional musician, scholar, and teacher Betty Smith will receive the Order of the Long Leaf Pine on October 2, 2017, during the Ramsey Center’s opening celebration for its new exhibit, “The Minstrel of Appalachia.” The award, conferred by the Governor of North Carolina, is one of the most prestigious in the state and is awarded for “exemplary service to the State of North Carolina.” 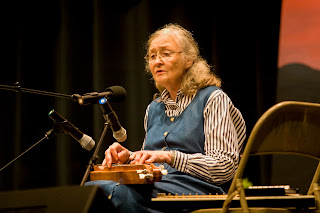 Betty Smith was born in 1926 in Rowan County and grew up in Guilford County, hearing her father sing traditional songs such as ballads and shape-note hymns. As a young woman she learned to play the guitar, autoharp, mountain dulcimer, and psaltery, and has performed and recorded extensively as a well-respected ballad singer and musician. She has spent much of her adult life in western North Carolina, and has made a significant impact on the study of traditional music through her scholarship on Madison County ballad singer Jane Hicks Gentry, from whom Cecil Sharp collected numerous ballads in 1916. Smith wrote a book about Gentry, "Jane Hicks Gentry: A Singer Among Singers" (The University Press of Kentucky, 1998), and also wrote and performed a one-act, one-woman play about the singer, "A Mountain Riddle."

Smith also has contributed to the perpetuation of North Carolina musical traditions through her teaching. She has taught at well-known schools in Appalachia, such as Berea College, the Pine Mountain Settlement School, the Swannanoa Gathering, and the John C. Campbell Folk School, and has also produced music curricula for elementary school students.

“Betty Smith is one of North Carolina’s greatest treasures: as a source of information about the folklore and musical history of Appalachia, as a gifted performer, and as a generous mentor to those who are interested in learning about our cultural heritage,” says New York Times best-selling author Sharyn McCrumb.

Smith is part of the Blue Ridge National Heritage Area’s Traditional Artist Directory and has received numerous awards for her contributions to the preservation and study of North Carolina’s musical traditions, including the Bascom Lamar Lunsford Award (2002), the North Carolina Folklore Society’s Brown-Hudson Award (2001), and the North Carolina Society of Historians’ Paul Green Multimedia and Willie Parker Peace History Book awards (1999 and 1998). In 2009, Smith received an honorary doctorate from Mars Hill University (then College).

The award will be presented by Carol Boggess, the university's vice president for academic affairs, during the opening celebration for the Ramsey Center’s new exhibition, "The Minstrel of Appalachia," about the life of Bascom Lamar Lunsford. The event, which is free and open to the public, is on October 2 from 3:30 to 5:30 p.m. in the Liston B. Ramsey Center in Renfro Library on the campus of Mars Hill University. It also will include remarks from university President Dan Lunsford (who received the Order of the Long Leaf Pine in March of 2017), refreshments, and mountain music from Roger Howell, Brandon Johnson, and Gary Spence. For more information, contact Leila Weinstein, program coordinator for the Ramsey Center, at 828-689-1115 or visit www.mhu.edu/ramsey-center.
Posted by Asheville Chamber at 11:16 AM