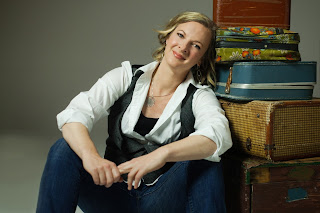 In 2007, playwright and stage performer Murphy Funkhouser Capps packed a Subaru with 500 pounds of baggage and hit the road with her one-woman show, Crazy Bag, an auto-biographical one-act play about her journey as a minister's daughter and single mother. After racking up accolades from coast to coast, Murphy has expanded the story into Carry On, a 90 minute play in three acts that will premiere at Asheville Community Theatre later this month, with ticket proceeds benefitting ACT’s Tanglewood Youth Theatre program. Carry On will be performed September 29-October 1, 2017 with performances on Friday, Saturday, and Sunday nights at 7:30 pm. Tickets are $20.00 and are available online at www.ashevilletheatre.org, over the phone at 828-254-1320, or in person at the Asheville Community Theatre Box Office.
No matter who you are or what road you took, everyone can expect an entertaining and moving theatre experience and will be delighted as Murphy fills the theater space with her volumes of baggage, which she artfully manipulates to create an ever-shifting stage set for her revealing, insightful stories. You never know what Murphy will pull out of the bag, but you can be sure you will enjoy the wild, yet moving, ride.
Crazy Bag has been called "hilarious, heart wrenching and heartwarming." The show, which is staged using only baggage as a set, follows Murphy as she wakes up to discover the baggage of her life has fallen out of the overhead compartment and she must "unpack" in order to move forward with her life.
In its premiere at the 2007 Colorado Theatre Festival, Crazy Bag won Best Set, Best Director, and All State Actress and Denver Post Ovation nominee honors. Crazy Bag went on to play full houses in Breckenridge, Aspen, Denver, Albuquerque and Oklahoma City and was accepted into the 2008 San Francisco Fringe Festival.
Murphy's performances brought her to back Asheville where her journey began the day she went screeching out the gates of "Bible College" almost two decades earlier. She performed Crazy Bag at NC Stage and at Asheville Community Theatre in 2009 and 2010.
In 2010, Murphy met her “matching luggage" and started a family in Black Mountain, NC. In her second year of marriage, she learned her husband had bone marrow cancer.
Murphy’s second play, Carry On, which provides insights into what to do when life hits turbulence and you must pick up the pieces all over again.
Carry On will be performed on the new Asheville Community Theatre Mainstage September 29, 30 and October 1, 2017. It will be directed by Jamieson Ridenhour who is well known for creating Terry Tempest and The Storm which recently performed in Asheville at the Magnetic Field.
Those familiar with Murphy's first play, Crazy Bag, will be delighted to hear both new and old stories, and see well-loved characters including “the Heathen,” Murphy's life-size cardboard cut-out alter ego.
Carry On will cover the original Crazy Bag story in Act One.
Tickets for Carry On are $20.00 and will benefit the ACT Tanglewood Youth Theatre Program. For tickets or more information, please visit www.ashevilletheatre.org.

Posted by Asheville Chamber at 4:45 PM