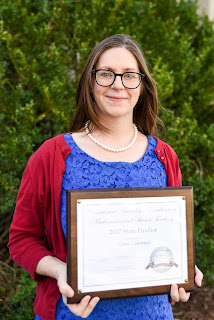 Asheville School Science Instructor Laura Lawrence is a state finalist for the 2017 Presidential Awards for Excellence in Mathematics and Science Teaching (PAEMST). She is one of three science instructors selected from across North Carolina, and this marks the second time that Lawrence has been selected as a finalist for the PAEMST, having reached the finalist round in 2013.

According to the National Science Foundation, "The [PAEMST] represent the highest honor bestowed by the U.S. government specifically for K-12 mathematics and science teaching."

Awardees receive a certificate signed by the President of the United States, a trip to Washington, D.C. to attend a series of recognition events and professional development opportunities, and a $10,000 award from the National Science Foundation.

Teachers who are nominated for the PAEMST go through an application process that, among other steps, includes providing letters of recommendation, submitting a lesson plan and providing video of their classroom teaching.

Lawrence submitted a lesson on cell division that is rooted in scientific modeling. Inspired by the American Modeling Teachers Association curriculum, which stresses critical reasoning and skills-based learning, Lawrence relies on modeling throughout the courses she teaches at Asheville School. In modeling-based learning, students must describe scientific phenomena in their own terms and reason through observations to create a model that encompasses the known data and lends predictive value to the subject they are studying.

"One of the main pedagogical techniques that I use is to present an authentic problem for the kids to solve," Lawrence said. "I want my students to be the curators of our metaphorical science museum rather than simply engaged participants, so giving them a problem scientists had to solve gives them the opportunity to build and test models like scientists do. By doing this, I hope to foster a natural critical learning environment that challenges their mental models and in which kids can safely take academic risks, fail, get feedback, and try again."

Lawrence recently traveled to an event in Raleigh, North Carolina in recognition of her achievement. She and the two other North Carolina finalists in science were presented with certificates and spoke to the audience about their work with students.

"Being a finalist is humbling, especially when I get to meet the other finalists and hear about the inspiring work they are doing in their classrooms," Lawrence said. "The last time I was a finalist for this award, I developed a professional relationship with the other finalists, with whom I continue to collaborate. Being a finalist has exposed me to new professional learning communities and challenged me to become a part of the larger educational community. It has made me realize that good educators aren't just leaders in their classrooms and schools, but that they share and collaborate with the larger educational community."

Join us in wishing her congratulations and good luck as she enters the final round of consideration for the PAEMST. Read more about the awards here<https://www.paemst.org/> and read an essay by Laura Lawrence published by the American Modeling Teachers Association about transitioning from lecture-based to modeling-based lessons here<https://modelinginstruction.org/june-amta-members-spotlight/>. PAEMST awardees will be announced in 2018.

Posted by Asheville Chamber at 4:13 PM