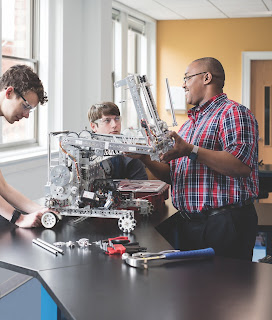 Asheville School is set to host 14 high school robotics teams from Western North Carolina as they compete in a regional qualifier organized by the nonprofit For Inspiration and Recognition of Science and Technology (FIRST). The FIRST Tech Challenge (FTC) qualifier will take place on January 13 in the Rodgers Memorial Athletic Center.

Asheville School robotics coaches, Charles Long and Bob Williams, are excited for the home match. “The team is really looking forward to hosting the competition,” Long said. “It is a great motivator for our team to build a successful robot. My hope is that along with the excitement that hosting this competition brings, we will also have the chance to shine a light on our technology initiatives at Asheville School.”

Building a successful robot is no simple task. According to FIRST, the competition involves designing, building, programming and operating a robot that can be driver-operated and autonomously respond to game tasks and challenges.
This year’s competition is called FIRST: Relic Recovery. Robots must be able to create “glyphs” by stacking blocks in specific formations as well as picking up and securing a team “relic” within a limited amount of time. The winning teams in the qualifier will advance to the state championship on February 10 in Greensboro, NC.

Williams says that the Blues have been working hard and are looking forward to testing their robot in competition. “We encourage parents, students and alumni to come out and cheer on this next generation of science and technology leaders,” Williams said. “By participating in this tournament, our students learn valuable life skills that will help them develop their leadership and communication skills.”

The competition is free and open to the public. Teams will begin meeting with judges for robot inspection in the morning, with the opening ceremony scheduled to start at 10:30 a.m. An awards ceremony should follow at 5 p.m., once the competition has ended.
Posted by Asheville Chamber at 11:07 AM