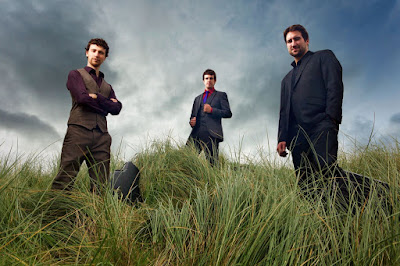 With dynamic vocals, virtuosic musical ability and charismatic wit, Socks in the Frying Pan, a multi-award-winning trio from Ireland’s County Clare, performs at Diana Wortham Theatre on Friday, February 9, 2018 at 8:00 p.m. With its brilliantly crafted tunes and masterful harmonies, this newer band to the Irish traditional music scene has been captivating audiences at home and abroad.

Presented in partnership with The Swannanoa Gathering at Warren Wilson College,
Socks in the Frying Pan’s unique blend of traditional Irish melodies and personal flare have gained them critical acclaim and praise, including being named “New Band of the Year” by the Irish Music Association and “New Group of the Year” by the Live Ireland Awards.

Aodan Coyne joined brothers Shane and Fiachra Hayes to release the group’s debut album in 2012. On guitar, button accordion and fiddle, respectively, the trio got their start performing in and around their home region of Western Ireland. After completing a highly successful U.S. Tour in 2014, the band gained momentum, carrying them through the release of a second well-received full-length album and on to multiple tours.

Recognized individually and as a band, each member has won multiple competitions and awards. Aodan’s debut solo album was praised as the “best CD release of the year” by Irish American News in 2014. Shane was awarded best accordion player in 2015 by the Irish Music Association and Fiachra was awarded the prestigious ‘Ceol an Gheimhridh’ recognition in the County Clare fiddle competition.

Socks in the Frying Pan’s February 9 performance at the Diana Wortham Theatre is presented in partnership with The Swannanoa Gathering at Warren Wilson College; and is made possible by Mainstage Celtic Series Sponsors Don & Nancy Ackermann Cole, Dr. Alan & Suzanne Escovitz, and PBI Commercial Interiors; with additional support from Media Sponsors WNC magazine and WNCW 88.7FM.

Posted by Asheville Chamber at 10:28 AM