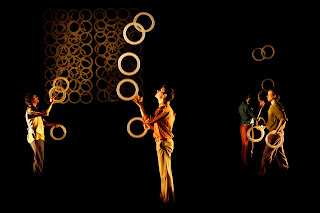 In a mesmerizing collaboration Motet: Circo Aereo + Gandini Juggling opens its premiere U.S. tour with back-to-back performances on Thursday and Friday, November 1 and 2, at Diana Wortham Theatre at Pack Place.

With captivating and gravity-defying movement, Motet: Circo Aereo + Gandini Juggling kicks off its premiere tour in the United States with back-to-back performances at the Diana Wortham Theatre on Thursday, November 1 and Friday, November 2 at 8:00pm each evening.  Motet brings together the award-winning contemporary circus skills of Finland’s Circo Aereo with the internationally acclaimed British troupe, Gandini Juggling. Motet’s performers manipulate objects that float, collapse, and mesmerize to create charming and magical images. One of the Asheville’s best-known jugglers, Keith Campbell of Forty Fingers & A Missing Tooth, considers Gandini Juggling to be one of the world’s best, adding, “They combine tremendous object manipulation skills with movement, rhythm, and storytelling and present it in unique ways to evoke a wide range of emotions.” In Motet, many parts become one to create a performance that The Helsignen Sanomat newspaper calls “absolutely brilliant.”

“We’re delighted to bring Motet to Asheville, a city with a burgeoning circus arts, cabaret and fringe scene of our own,” says John Ellis, Managing Director of Diana Wortham Theatre. “The inventive performance art of Motet is right in line with the unique artistic exploration and expression found at the likes of the Lexington Avenue Arts and Fun Festival and the Asheville Fringe Festival.” Keith Campbell explains the influence of juggling on the emergence of nouveau circus. “For a vast majority of people, when they think of juggling, they thing of clowns or the traditional ‘big top’ style circus. However, juggling is so much more than that. Juggling truly is a performance art, and Gandini Juggling has been pushing the boundaries of that art and inspiring others to do the same.” Asheville Vaudeville and Asheville Juggling Festival board member Walter Beals says, “I’m thrilled that Sean Gandini and his troupe will be performing in Asheville … when I was a student at Circomedia Circus Arts School in Bristol, England, he was one of my juggling instructors. I’m exited to see him again.”

Under the direction of Maksim Komaro of Circo Aereo, Motet premiered in May 2011 at the New Circus Festival in Helsinki, Finland. John Ellingsworth of Sideshow Magazine describes the collaboration: “Motet has some of the hallmarks of either party's work: from the Gandinis there's the technical repertoire, the recognizable company dynamic, and characteristics like the Procession of Jugglers; from Maksim [of Circo Aereo], there's magic…and a love of chaos and collapse.” This combination of technical skill and whimsical style is sure to delight audiences as Motet tours in the United States for the first time.

Circo Aereo, an international contemporary circus group from Finland, first astonished and fascinated Asheville audiences at Diana Wortham Theatre in October 2009. The group is a recipient of the prestigious Finnish Award given by the Finnish Ministry of Education and Culture and is one of the most active Finnish cultural exports. Active since 1996, the group has visited distinguished festivals and theatres in over 20 countries. Circo Aereo's barrier-breaking and open approach to the various forms of the performing arts mesmerizes and astonishes audiences around the world.

Gandini Juggling are pioneers of movement juggling, fueled by the belief that juggling is an exciting living art form. Based in England, during the past 20 years the company has performed over 4,000 shows in 40 countries, including multiple guest appearances with Cirque du Soleil. According to Sideshow Magazine, “They're juggling nerds, and you feel that the work closest to their hearts is the work that reflects this most strongly: pieces about patterns, mathematics, juggling itself. In the UK, there's no other company like them; they're one of the best.” In recent years the group has done several residencies at the National Theatre in London for the Watch This Space Festival, which brings together jugglers from around the globe to create performances that push the boundaries of juggling.

Motet: Circo Aereo + Gandini Juggling’s Asheville performance is made possible by Performance Sponsor BB&T, and by Mainstage Special Attraction Series Sponsor Diamond Brand Outdoors, with additional support from Media Sponsors 98.1 The River and The Laurel of Asheville.
Posted by Asheville Chamber at 3:46 PM