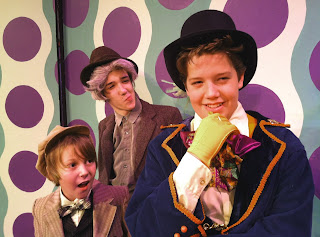 Willy Wonka, Jr. is directed by Jeff Catanese with musical direction by Aaron Price and features a cast of 30 students between the ages of 7 and 15. Performances are Friday night at 7:30 pm and Saturday and Sunday afternoons at 2:30 pm.  All tickets are $5.00.

Willy Wonka, Jr. follows enigmatic candy manufacturer Willy Wonka as he stages a contest by hiding five golden tickets in five of his scrumptious candy bars. Whoever comes up with these tickets will win a free tour of the Wonka factory, as well as a lifetime supply of candy. Four of the five winning children are insufferable brats: the fifth is a likeable young lad named Charlie Bucket who takes the tour in the company of his equally amiable grandfather. The children must learn to follow Mr. Wonka's rules in the factory--or suffer the consequences.

“From an audience member’s perspective, it’s really powerful for a child to see an entire cast made up of children,” said Chanda Calentine, Education Director at ACT. “And from a student’s perspective, they learn first hand about the fun and the hard work involved in being in a musical theatre cast.”

For more information about the production, or about upcoming classes, please visit www.ashevilletheatre.org or call 828-254-2939 x21 for Education Director Chanda Calentine.
Posted by Asheville Chamber at 9:14 AM