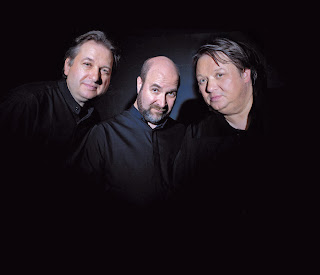 Offering a fresh take on standards of the American Songbook as well as innovative new acoustic compositions, The Kruger Brothers perform at Diana Wortham Theatre on November 17, 2012 at 8:00 p.m. Drawing on a rich cultural palette, theirs is a music that celebrates the best of what music can be: exciting, engaging, intelligent, and delightful. Dan Tackett of Bluegrass Journal notes, “The Kruger Brothers are nothing short of magnificent, the classiest of acts as can be found on today’s bluegrass and acoustic scene…The Krugers’ sound is both intense and tranquil, it’s classic, classy and classical, and it’s jazzy and grassy – all at the same time and packed into one CD or one of the brothers’…concerts.”

Since a formal introduction to American audiences in 1997, the Kruger Brothers’ remarkable creativity and facility with their instruments have made them a fixture within the world of acoustic music.

Born and raised in Europe, brothers Jens Kruger (banjo, vocals) and Uwe Kruger (guitar, lead vocals) started singing and playing instruments at a very young age and were exposed to a wide diversity of abiding musical influences. The brothers were performing regularly by the time they were 11 and 12 years old, and began their professional career in 1979. Their first public performances were as a duo, busking on the streets of cities throughout eastern and western Europe.  Joel Landsberg (bass, vocals), a native of New York City, joined the brothers in the early ‘90s and together they established the incomparable sound that the trio is known for today. In 2002, the brothers moved to the United States, and are based in Wilkesboro, North Carolina.

In an ever-expanding body of work, Jens Kruger, Uwe Kruger, and Joel Landsberg personify the spirit of exploration and innovation that forms the core of the American musical tradition. Their contribution to American musical culture has been noted through a National Endowment for the Arts grant for Music from the Spring, a symphonic suite composed and orchestrated by Jens Kruger, which premiered in 2007. In late 2010, the Kruger Brothers premiered the Appalachian Concerto, a concerto for banjo, bass, guitar, and string quartet. Their most recent release, Best of the Kruger Brothers (2012), includes a selection of songs from their existing albums and compositions, as well as previously unreleased material.

The Kruger Brothers’ Asheville performance is made possible by Performance Sponsors Dianne & David Worley, and by Mainstage Music Series Sponsors BMW of Asheville and Henry LaBrun, with additional support from Media Sponsors 880AM The Revolution, News Radio 570 WWNC, and WNC magazine.

The Diana Wortham Theatre at Pack Place is located in the same complex as the Asheville Art Museum and the Colburn Earth Science Museum and is within walking distance of many shops and restaurants. The intimate theatre seats just over 500 and boasts exceptional acoustics and sightlines, making it the premier performance space in all of Western North Carolina. The Mainstage Series is supported by a grant from the North Carolina Arts Council, a state agency. The Mainstage Series 2012/2013 Season Sponsors are the Asheville Citizen-Times, Creative Energy, Laurey’s Catering and Gourmet-to-go, the North Carolina Arts Council, and Renaissance Asheville Hotel. To obtain more information on the Mainstage Series or to purchase tickets, call the theatre’s box office at (828) 257-4530 or visit www.dwtheatre.com.
Posted by Asheville Chamber at 9:37 AM