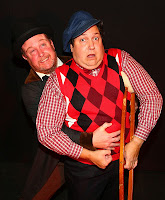 Holiday mayhem erupts at Asheville Community Theatre with the opening of Inspecting Carol, a comedy that mixes the pacing of Noises Off with the behind the scenes hilarity of Waiting for Guffman. Inspecting Carol will open at the downtown theatre on Friday, November 16, 2012 and run through Sunday, December 2, 2012 with performances on Friday and Saturday nights at 7:30 pm and Sunday afternoons at 2:30 pm (no performance Friday, November 23).  Tickets are available online, over the phone, or in person at the Asheville Community Theatre Box Office.

In Inspecting Carol, a man who asks to audition at a small theatre is mistaken for an informer for the National Endowment for the Arts. Everyone caters to the bewildered wannabe actor and he is given a role in the current production, A Christmas Carol. Everything goes wrong – mechanical glitches, a misguided rewrite, horrific costuming choices – and hilarity is piled upon hilarity. A satire on the demands of arts organizations to maintain their grant funding masquerading as a slapstick comedy, Inspecting Carol is a laugh a minute ride through the last days of rehearsal before what may be one theatre’s last opening night.

For more information about Inspecting Carol or about Asheville Community Theatre, please visit www.ashevilletheatre.org.
Posted by Asheville Chamber at 4:17 PM