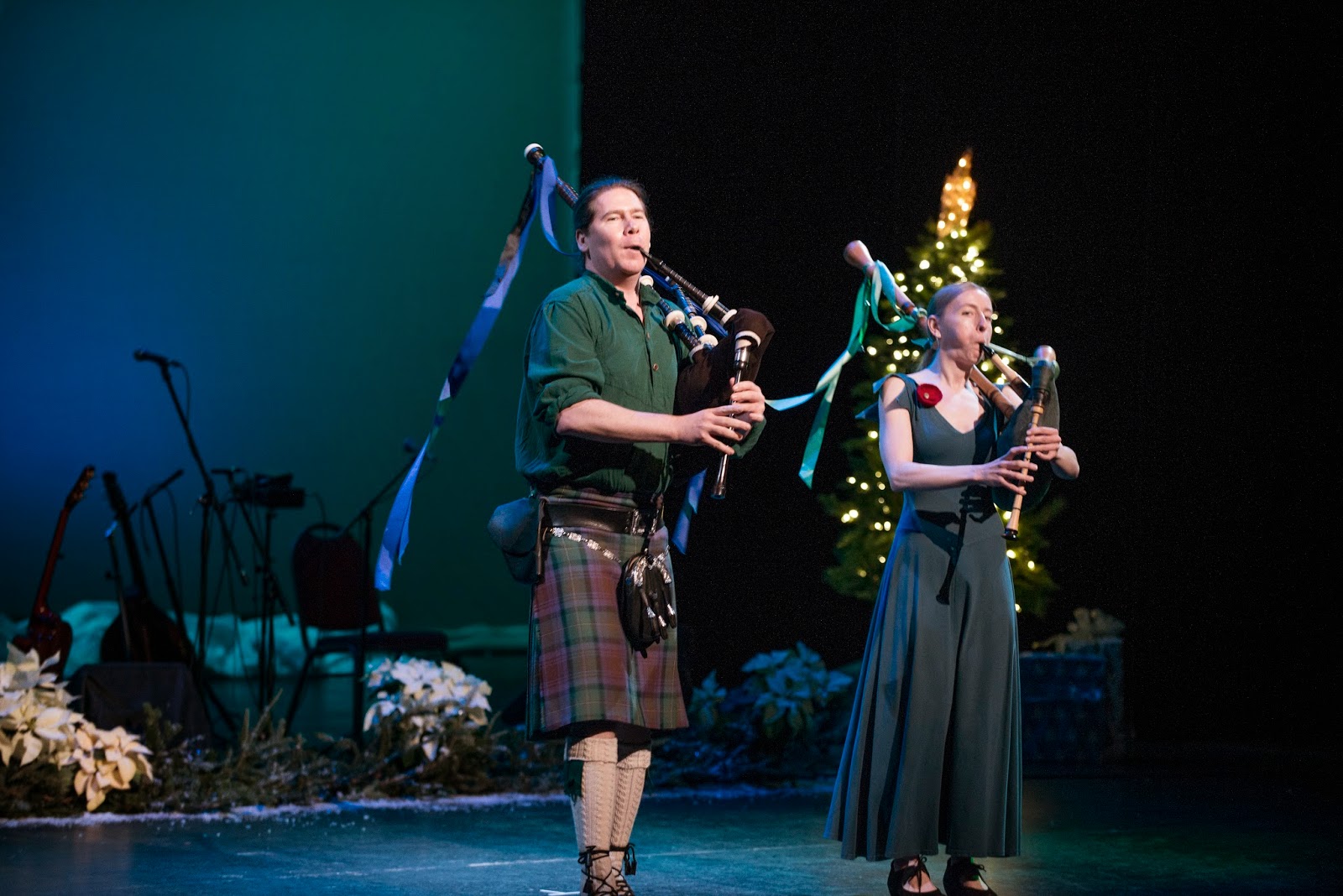 Award-winning recording artists Al Petteway, Amy White, and Robin Bullock lead the annual holiday concert A Swannanoa Solstice, Sunday, December 21 at 2:00 p.m. and 7:00 p.m. at Diana Wortham Theatre in downtown Asheville, with festivities beginning in the lobby prior to the performances with complimentary wassail and cookies, and music by The Piper Jones Band during intermission. In this annual winter holiday celebration, now in its 12th year, world-renowned musicians Petteway and White along with Bullock and a host of special guests share holiday songs old and new, religious and secular, joyful and poignant, in a warm and intimate winter concert.

Presented in partnership with The Swannanoa Gathering at Warren Wilson College, A Swannanoa Solstice again offers two performances in order to meet the audience demand for this popular winter gathering and concert.

This year’s special guests include:

A Swannanoa Solstice showcases all manner of seasonal sounds and festivities, with well-mastered Celtic and Appalachian songs and music on guitar, mandolin, fiddle, piano, Celtic harp, Irish bouzouki, vocals and world percussion. Through music and storytelling and poetry, the featured artists explore shared winter traditions from the area, the country, and from around the world. The melodies played by Petteway, a virtuosic acoustic guitarist, draw from a broad variety of cultural influences from Middle East tonalities to Scottish jigs. White, on piano, mandolin, guitar, Celtic harp and percussion, draws on her classical background to create beautiful and compelling original compositions and arrangements of traditional favorites. Bullock, a multi-instrumentalist who plays the guitar, mandolin and bouzouki is hailed as a master musician whose style skillfully embraces Celtic and Classical music.

More about the artists:

Grammy winner Al Petteway and his wife and musical partner Amy White perform an exciting blend of original, traditional, contemporary Celtic- and Appalachian-influenced music.  Their repertoire offers extensive instrumental work featuring acoustic guitars, mandolins, Celtic harp, piano and world percussion as well as a fine touch of vocals. They have been Artists in Residence at Warren Wilson College and The Kennedy Center Millennium Stage. Their award-winning signature sound is heard often on public radio programs and has been used in the soundtracks for a number of Ken Burns’ films, most notably the Emmy-winning PBS documentary, The National Parks-America’s Best Idea. While living in the Washington, D.C. area, Al & Amy won a grand total of 50 Wammies from the Washington Area Music Association in the Folk, Celtic and New Age categories. They received a coveted Indie Award for their CD Gratitude (2001) and Al won a Grammy for his solo fingerstyle guitar rendition of Henry Mancini’s The Thornbirds Theme featured on the pop instrumental compilation, Pink Guitar (2004). The readers of Acoustic Guitar magazine voted him one of the top fifty guitarists of all time. Al is the coordinator of Guitar Week for the world famous Swannanoa Gathering at Warren Wilson College, and was given the “Master Music Maker” award for his contributions to the program in 2013. Amy’s 2012 release, Home Sweet Home, was in the top ten on the national folk/roots charts and held the number one spot in North Carolina for more than a month in 2012. Al’s 2014 release, Mountain Guitar, features solo acoustic guitar and paints a musical portrait of the southern Appalachian Mountains. Al and Amy are both stock photographers with National Geographic Creative, and their photographs are represented in The National Geographic Society’s Image Collection, where Al worked as an image editor for 18 years. These photos are translated onstage during A Swannanoa Solstice in photographic backdrops of the Southern Appalachians in winter repose. Al and Amy make their home on top of the Elk Mountains range in nearby Weaverville, NC.

Hailed as a "Celtic guitar god" by the Baltimore City Paper, guitarist/mandolinist/citternist Robin Bullock is a winner of Editor's Pick and Player's Choice Awards from Acoustic Guitar Magazine, the Association for Independent Music's prestigious INDIE Award (with the world-folk trio Helicon), multiple Washington Area Music Association WAMMIE Awards, a Governor's Award from the Maryland State Arts Council, and a bronze medal at the National Mandolin Championship in Winfield, Kansas. His twelve solo and collaborative recordings include two holiday CDs, A Guitar for Christmas and Christmas Eve is Here, and Majesty and Magic: Music of Bach, Dowland and Carolan for Solo Guitar. His most recent release, Alone and Together, is a collaborative effort with fingerstyle guitarist, Steve Baughman. Robin also tours internationally as sideman with Grammy-winning folk legend Tom Paxton, including Tom's "Together at Last" tours with Janis Ian. A native of Washington, D.C. and a longtime resident of France, Robin now makes his home in Black Mountain, NC.

A Swannanoa Solstice is presented annually in partnership with The Swannanoa Gathering at Warren Wilson College, and is made possible by Performance Sponsors Dan & Anna Garrett, Bill & Marilyn Hubbard, and Marrion & Rockwell Ward; and by Mainstage Special Attractions Series Sponsors Joel & Deborah Bohan Berkowitz and Wells Fargo; with additional support from Media Sponsors The Laurel of Asheville, WCQS 88.1 FM, and WTZQ AM 1600.

The entrance for the Diana Wortham Theatre is marked by the location of the theatre’s marquee between 12 and 14 Biltmore Avenue. Patrons enter the theatre through the breezeway between Marble Slab Creamery and White Duck Taco restaurants, and into a large interior courtyard with multiple glass doors to the theatre’s lower lobby and box office. The intimate theatre seats just over 500 and boasts exceptional acoustics and sightlines, making it the premier performance space in Western North Carolina. The Mainstage Series is supported by a grant from the North Carolina Arts Council, a state agency. The Mainstage Series 2014/2015 Season Sponsors are the Asheville Scene, Blue Moon Water, Creative Energy, Laurey’s Catering and Gourmet-to-go, the North Carolina Arts Council, and the Renaissance Asheville Hotel. To obtain more information on the Mainstage Series or to purchase tickets, call the theatre’s box office at (828) 257-4530 or visit www.dwtheatre.com.

Posted by Asheville Chamber at 9:36 AM