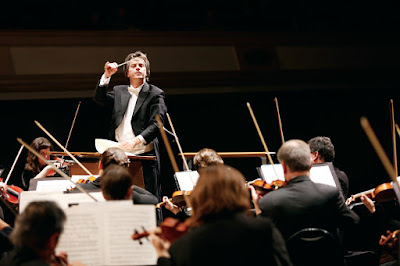 A soprano straight from the Metropolitan Opera stage. Big orchestral works by Beethoven, Verdi and Dvorak. A top-selling cellist and recording artist. One of the world’s best interpreters of the great Frank Sinatra. The 2015-16 Asheville Symphony season is sure to be one of its biggest in recent years.

“We are excited to present a season that includes top-notch solo musicians with international careers and Masterworks performances that require some of the biggest orchestras in the classical repertoire,” said ASO Executive Director David Whitehill. “It’s an opportunity to really show off the Asheville Symphony at its best.”

All seven Masterworks concerts begin at 8 p.m. and are held at Thomas Wolfe Auditorium in the U.S. Cellular Center. ASO Music Director and Conductor Daniel Meyer will lead the orchestra.

The Masterworks season will open Saturday, Sept. 19 when the Asheville Symphony introduces the brilliant American soprano Angela Brown as a special guest.  Known for her sumptuous voice, Brown will perform some of her signature roles, including beloved arias by Puccini and Verdi and favorites from Gershwin’s Porgy and Bess and Bernstein’s West Side Story.

“We know this program will be a highlight of the season and a concert that music fans will truly savor,” Whitehill said. “Angela received incredible praise and reviews for her Metropolitan Opera debut as Aida, so it’s thrilling to think we’ll have an opportunity to perform some of those same arias here in Asheville.”

On Saturday, Oct. 17, the ASO welcomes David Kim, concertmaster of the Philadelphia Orchestra, for a performance of Bruch’s virtuosic Violin Concerto No. 1. The orchestra will open the concert with Osvaldo Golijov’s “Sidereus,” a hit overture written by one of classical music’s hottest composers, and also perform Schumann’s Second Symphony.

The ASO’s Masterworks 3 concert on Saturday, Nov. 21, features a season highlight. The orchestra will perform Holst’s The Planets, an orchestral suite that explores the cosmos and the astrology of our own solar system and requires a massive orchestra. Haydn’s Sinfonia concertante, which is also on the program, highlights the members of the orchestra including concertmaster Jason Posnock, principal oboe Alicia Chapman, acting principal cello Franklin Keel, and principal bassoon Michael Burns for solos while the musicians of the ASO provide the charm and zest that makes Haydn’s music so joyous.

The Masterworks season continues on Saturday, Feb. 13, as rising star Stefan Jackiw makes his Asheville debut with Beethoven’s bold and brilliant Violin Concerto. Two other works on the program are Mendelssohn’s Hebrides Overture, which captures the composer’s visit to and impressions of Scotland, and Strauss’ Metamorphosen, an elegiac and deeply stirring work for twenty-three solo musicians.

Selections from Berlioz’s scintillating Romeo and Juliet and Mozart’s beloved Piano Concerto No. 12 will highlight Masterworks 5 on Saturday, March 12. Another season highlight headlines Masterworks 6 on Saturday, April 16, when the Asheville Symphony Chorus and a quartet of rising operatic stars will join the ASO for Verdi’s Requiem. This powerhouse work features soaring, memorable melodies, bone-crushing sonics, and an indelibly Romantic spirit.

Cellist Zuill Bailey, one of the top-selling classical artists in the U.S., will close out the Masterworks season on Saturday, May 14 with his performance of an ASO co-commission, Daughtery’s Tales of Hemingway. A musical look at the fascinating life of the great American author, this new cello concerto will most certainly display Bailey’s superb technique and his innate flair for the dramatic. The ASO will finish the season with Dvorak’s Symphony No. 9 “From the New World,” a groundbreaking work that  taps into America’s rich Native American and African American culture by incorporating spiritual-tinged melodies, the “Song of Hiawatha,” and an exuberant finale.

The ASO will also offer two concerts outside of the Masterworks season. As a holiday treat, singer Steve Lippia will star in “Simply Sinatra Christmas” featuring Christmas favorites and iconic Sinatra numbers. The concert is scheduled for Friday, Dec. 11 – the day before the 100th anniversary of Sinatra’s birth.
The Asheville Symphony Chorus will present “American Folk Songs: Sacred and Secular,” on Saturday, Nov. 7.

Single tickets for all concerts start at $22 for adults and $11 for youth. Single tickets and season ticket packages can be purchased at www.ashevillesymphony.org, by calling 828-254-7046, or in person at the U.S. Cellular Center box office at 87 Haywood Street.