Other than his wife and children, two passions motivate Peter Ripmaster: running and fighting cancer. All the funds he raises next year during his quest to complete the 2016 Iditarod Trail Invitational, he will donate to The Hope Chest for Women, a local nonprofit that supports women with breast and gynecologic cancer.

Running for a Cause 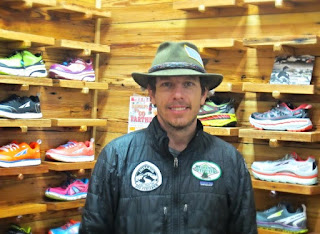 Peter did not want to run just for running’s sake, he wanted to run for a cause. The battle against cancer was the clear choice. The day following his 24th birthday, Peter’s mom died of cancer after fighting the disease for three years. That great loss brought about a change in Peter’s life. His young adult years could be described as a self-serving affair with little or no direction. The death of his mom propelled Peter to a greater maturity. It also helped him find his “true north” and a cause to run for.His mom would be proud!

Although Peter inherited great athletic genes and excelled in numerous sports growing up, he never really hit his stride until he discovered long-distance running. On October 12, 2008, Peter ran his first marathon—sort of. In his early thirties, overweight and out-of-shape, Peter informed his wife, Kristen, that he had decided to run 26.2 miles on the Blue Ridge Parkway—by himself. So, with a jug of Gatorade in his hand and a few power bars in his pockets, Peter ran (stumbled?) from south Asheville to Mt. Pisgah and back. Kristen awaited his return. As he staggered to the finish line, she witnessed his spent body collapse to the ground. As Peter lay sprawled out on the grass, hardly able to move, he came to this realization: “I loved it!” A marathoner was born.

The 50-State Club
For the last 7 years Peter has been running marathons and ultras (up to 100 miles). In 2013 he completed his goal of running a marathon in every state of the United States. He used those 26.2-mile-runs to raise $61,000 to fight cancer in memory of his mother.

North to Alaska!
In 2014, Peter sought out a new adventure. He traveled to Alaska to take part in the Iditarod Trail Invitational. The trail run, starting just outside of Anchorage, follows the same first 350 miles as the well-known sled-dog race.  The major difference: runners pull their own sleds in the trail run! Peter completed the 350 miles, finishing 14th out of 14 runners. He returned for his second attempt last month (2015 race). He finished 3rd out of 14 runners.

1000 Miles in 30 Days
Believe it or not, Peter has his sights set upon an even greater challenge. Those who have successfully completed the 350-mile Iditarod Trail Invitational, qualify for the following year to keep running 650 more miles (within 30 days) to finish in Nome, Alaska. In the last 15 years, only 13 individuals have completed the 1000-mile trail run. Needless to say, Peter will run the extra miles for a purpose greater than
Posted by Asheville Chamber at 3:49 PM