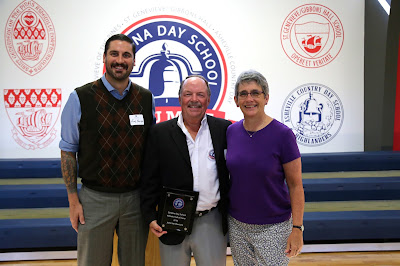 Joanne Bartsch, John Van Blaricom ACDS '69, and Amy Sharpe Clifford CDS '95 were inducted into the Athletic Hall of Fame Saturday, October 15. Sponsored by the CDS Alumni Association, the Athletic Hall of Fame recognizes members of the Carolina Day School family who have distinguished themselves as outstanding contributors to athletics at CDS or its predecessor schools; demonstrated good sportsmanship and citizenship character; and left a lasting impression of achievement and excellence on the CDS athletic family. This year’s recipients were chosen from a list of over two-dozen former athletes and coaches nominated by both past and present members of the Carolina Day community.

Amy Sharpe Clifford CDS ‘95 was a phenomenal athlete for Carolina Day. Her athleticism, selfless attitude, and passion for sports led her to have an outstanding career at Carolina Day School. She is a natural born leader, which is why Amy skipped eighth grade and went into ninth grade. Even though Amy was the youngest in her grade, She played on all variety sports; basketball, soccer and field hockey. She was part of state championship teams in both basketball and soccer. Captain, MVP, All-State nominations, scored over 1,000 points in basketball. Amy went on to play one year of basketball at Presbyterian College and then finished playing basketball at UNC Asheville. (Her brother, Andy Sharpe accepted the award on behalf of his sister.)

John Van Blaricom ACDS ‘69 exemplifies a lifetime dedication to excellence and athleticism that began while John was a student at ACDS. John was awarded the Richard Washburn Award, triple letterman, several captain and co-captain ships, all conference titles and several school records. John was a well-rounded athlete, and excelled at Soccer, Basketball and Tennis at ACDS. After graduating from ACDS, John became a coach and mentor to many. He was a soccer referee, and directed a summer tennis program through the Asheville Parks & Recreation to teach tennis to inner city children. Many of his students in that program went on to very successful college careers. In the winter, John taught snow skiing as an instructor at the French-Swiss Ski College at Appalachian State University, and later became the Head Tennis Pro at Hendersonville Country Club. John continued his passion for sports, and decided to own and run multi-million dollar Golf and Tennis franchise, which was named one of the top 10 golf and tennis retail stores in the United States. John continues his interest in Golf to this day and has won two club championships at the Hendersonville Country Club. John continues his legacy by sharing his wisdom with others.

Joanne Bartsch has been a part of the Wildcat family for 26 years. During that time, she has impacted thousands of lives. She has celebrated victory. She has wallowed in defeat. There have been tears and smiles. She’s returned late from games. She’s arrived early the next day to ensure her classroom is ready. Through all of it, there has been a commitment to others over self, to students and to Carolina Day School.

Posted by Asheville Chamber at 10:02 AM