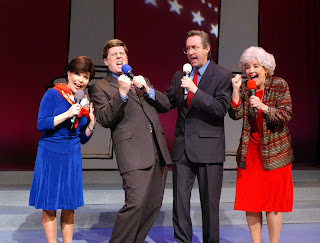 For more than 30 years they have been putting politics and scandal to music, and now The Capitol Steps perform their irreverent political parodies for two nights at Diana Wortham Theatre on October 17 & 18, 2012 at 8:00pm. No matter your political stance, laughter is the best medicine in an election year, and The Capitol Steps administer a healthy dose.

Since they began, The Capitol Steps have recorded over 30 albums, including their latest, Take the Money and Run — for President. They've been featured on NBC, CBS, ABC, and PBS, and can be heard four times a year on National Public Radio stations during their Politics Takes a Holiday radio specials. The group has received numerous accolades including The Washington Post’s “Best Bets Readers’ Choice Award for Best Live Theatre” in 2005, and the Washington Area Music Association’s Wammie Award for “Cabaret/Musical Theatre” in 2011 for the fourth year in a row.

No matter who holds office, The Capitol Steps never have a shortage of material. Says founding member Elaina Newport, “Typically the Republicans goof up, and the Democrats party. Then the Democrats goof up and the Republicans party. That's what we call the two-party system." The Steps have performed in all 50 states and internationally in addition to their standing weekend performances in the group’s hometown of Washington D.C.

The Steps’ material is updated constantly to keep up with current events. Current examples include songs about Mitt Romney, including "Help Me Fake It to the Right,” and President Obama, "If I Tax a Rich Man." In addition, they offer their own take on such trending topics as Secret Service indiscretions, the EU's money woes and what to do with Greece. No matter who or what is in the headlines, you can bet the Capitol Steps will tackle both sides of the political spectrum.

Posted by Asheville Chamber at 4:21 PM