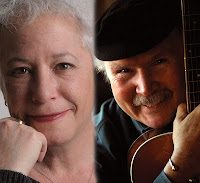 Pillars of American songwriting and folk music Janis Ian and Tom Paxton come “Together At Last” on stage for an 8:00 p.m. October 20th Mainstage Music Series performance at Diana Wortham Theatre at Pack Place. These passionate singer-songwriters share their deep talents as they perform their songs that formed the foundations of American folk music as well as newer compositions. This is a rare opportunity to see these two historic musicians on one stage and witness their natural affinity.

A Grammy winner who has been in the music business for over four decades, Janis Ian began her mostly stellar, sometimes stormy, professional life in 1964 at the ripe old age of 12 when she wrote her first song and was published by Broadside Magazine. That led to her first “real” show in New York, where she shared a stage with Tom Paxton and a host of other singer-songwriters. At age 15 her controversial song “Society’s Child” about an interracial relationship was at first banned on many radio outlets, but later reached number one on the charts. In 1976 she received five Grammy nominations for the album Between the Lines and the single “At Seventeen,” which has become a classic that is still revered today. Both “Society’s Child” and “At Seventeen” have been inducted into the Grammy Hall of Fame. In 2008 Ian released her autobiography Society’s Child: My Autobiography and her musical anthology Best of Janis Ian: The Autobiography Collection, which contains her very first recording (a demo made on her father’s tape recorder when she was 12); both have received rave reviews.

Tom Paxton received a 2009 Lifetime Achievement Award from The Recording Academy during the 51st Annual Grammy Awards. He has been nominated for numerous Grammy Awards, has received the Lifetime Achievement Award from the American Society of Composers, Authors and Publishers, and a Lifetime Achievement Award from the BBC in London. Paxton’s early success in Greenwich Village coffeehouses led to an ever-increasing circle of work. In 1965 he made his first tour of the United Kingdom -- the beginning of a still-thriving professional relationship that has included at least one tour in each of the succeeding years. Over the years Paxton has performed thousands of concerts around the world. His songbooks, critically acclaimed children's books, award-winning children's recordings, and catalog of hundreds of songs all serve to document Tom Paxton's 45-year career.