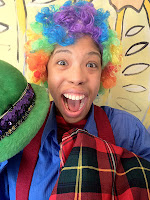 Saturdays at ACT presents Bella Under the Bigtop and Harriet Tubman: On February 2, 2013, Bright Star Touring Theatre returns to headline Asheville Community Theatre’s Saturday family series with two different back-to-back productions. Bella Under the Bigtop is an all-ages show about a traveling circus that’s just hired a new monkey.  But the monkey would rather spend his time bullying the performers than building friendships. Ringmaster Bella works with the audience to help teach the monkey kindness while stressing teamwork, compassion, and respect. Performance begins at 10:00 am.

Harriet Tubman celebrates the most famous conductor on America’s Underground Railroad in this historically accurate and inspiring production. Join Ms. Tubman as she makes her own daring escape from slavery and works to help some 300 people make their way to freedom.  Performance begins at 11:30 am. Tickets for either show are $5.00.

Neighbors Presented in 35below: Different Strokes! Performing Arts Collective moves into 35below in February for a three show residency, beginning with their production of Arkady Leodum’s Neighbors.  Neighbors picks up where A Raisin in the Sun ended and well before the world invented in Clybourne Park could exist. Chuck and Mary Robinson, a liberal white couple, have decided to sell their house to Bill and Vicky Gunther, an affluent black couple. The Robinsons resolve to stand firm in their principles and face whatever problems may result from this decision, but gradually, unspoken tensions emerge, the facade of self conscious political correctness is stripped away, and all pretense vanishes – on both sides – leaving a wreckage of good intentions.  Neighbors will be performed February 8-24, 2013 with performances Friday and Saturday nights at 7:30 pm and Sunday afternoons at 2:30 pm.  Ticket information will be posted at www.differentstrokesavl.com.

Auditions for The Grapes of Wrath: Auditions for Frank Galati’s adaptation of John Steinbeck’s majestic Pulitzer Prize winning novel will be held February 19-20, 2013 at Asheville Community Theatre.  This show features a cast of 22 with both smaller and larger roles.  Auditions are open to all in the community, no previous experience required.  All audition material is provided at the auditions. Directed by Susan Dillard.