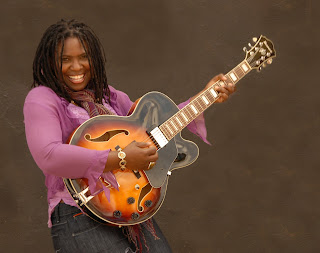 Winner of the 2011, 2012 and 2013 Koko Taylor Award for Traditional Blues Female Artist, Ruthie Foster, and her band open the Mainstage Season at Diana Wortham Theatre on Friday, September 20, 2013 at 8:00 p.m. The evening begins with a 7:00 p.m. opening night party sponsored by Pack’s Tavern, and an opening act, blues and roots artist Seth Walker.

An electrifying artist bristling with soul, Grammy-nominated Foster smolders with an intensity born from her vibrant voice and indelible presence. Backed by her excellent band including Tanya Richardson (bass) and Samantha Banks (drums), Foster can burn down any stage with her combustible blend of soul, blues, rock, folk and gospel.

Foster was Grammy-nominated for her last two albums: The Truth According to Ruthie Foster (2010) and Let It Burn (2012). With an unexpected collection of songs including selections by Adele, Black Keys, Los Lobos, Johnny Cash, The Band, Pete Seeger, Crosby, Stills & Nash, Foster creates a sound with the irresistible fire of the great women of soul, but with a freshness all its own.

From humble beginnings in a rural Texas church choir, Foster’s astonishing voice has taken her on an amazing ride including a tour of duty with the U.S. Navy Band and time absorbing the musical influences of the New York City music scene. Back in Texas she became a regular nominee at the Austin Music Awards winning Best Folk Artist in 2004-05 and Best Female Vocalist in 2007-08. Also, in a nod to her astounding range, she won Blues Music Association awards for Best Traditional and Best Contemporary Female Blues Artist in back-to-back years. She has collaborated on stage and in recordings with a diverse list of artists including Warren Haynes, Bonnie Raitt and Paul Thorn, and is a favorite at festivals including the New Orleans Jazz and Heritage Festival, the Monterey Blues Festival and Merlefest.

Ruthie Foster’s Asheville performance is made possible by Performance Sponsors Dianne & David Worley and Parsec Financial, and by Mainstage Music Series Sponsors Henry LaBrun and Arby’s, with additional support from Media Sponsors The Laurel of Asheville and WNCW 88.7FM.

The new entrance for the Diana Wortham Theatre at Pack Place is marked by the location of the theatre’s new marquee between 12 and 14 Biltmore Avenue. Patrons enter the theatre through the breezeway between Marble Slab Creamery and Circle in the Square restaurants, and into a large interior courtyard for Pack Place with multiple glass doors to the theatre’s lower lobby and new box office. The intimate theatre seats just over 500 and boasts exceptional acoustics and sightlines, making it the premier performance space in all of Western North Carolina. The Mainstage Series is supported by a grant from the North Carolina Arts Council, a state agency. The Mainstage Series 2013/2014 Season Sponsors are the Asheville Scene, Blue Moon Water, Creative Energy, Laurey’s Catering and Gourmet-to-go, the North Carolina Arts Council, and the Renaissance Asheville Hotel. To obtain more information on the Mainstage Series or to purchase tickets, call the theatre’s box office at (828) 257-4530 or visit www.dwtheatre.com.
Posted by Asheville Chamber at 4:34 PM