New Belgium Brewing, maker of Fat Tire Amber Ale and a wide variety of award-winning beers, is once again taking its beer-toting, film-traveling, nonprofit-benefiting show on the road and is coming to Asheville on Friday, September 6, 2013, at 7 p.m., at  Pack Square Park, 121 College Street, Asheville, 28801. 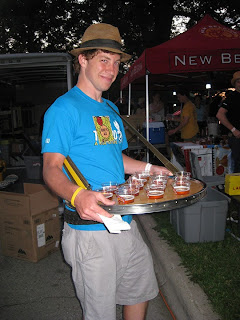 Clips is a national beer and film festival where guests can try beers from New Belgium’s Lips of Faith series, along with some popular classics, and screen short films made by New Belgium fans.

New Belgium selects approximately 20 films each season. All chosen entries for the 2013 season will receive a custom gift from New Belgium and screenings along the entire tour. Approximately 16,400 attendees attended the Clips beer and film festival last year alone.


This year, the chosen films include mastering the technique of dice rolling; the quest for the ultimate full moon shot; a duel to be the hippest hipster; and homebrewing in a small New York City apartment.

For the latest information on Clips, visit www.newbelgium.com/events/clips-beer-and-film/cities.aspx.
Posted by Asheville Chamber at 12:43 PM