New York and London based Aquila Theatre presents back-to-back performances of Ray Bradbury’s Fahrenheit 451, 8:00 p.m. Friday, January 31 and Shakespeare’s Twelfth Night, 8:00 p.m. Saturday, February 1 at Diana Wortham Theatre. Aquila Theatre is one of the foremost producers of touring theater and is widely renowned for bringing a thoroughly modern sensibility to great classics throughout the United States and abroad. The company delights audiences with innovative takes and clever staging of strong scripts. Over the past several Mainstage Series seasons, Asheville audiences have come to know and anticipate the annual repertory offering of this creative company on the intimate stage of the Diana Wortham Theatre, and to experience Aquila’s “two plays in two days” tradition. Back-to-back, the same talented cast performs both nights but in different roles, often dissimilar in nature. 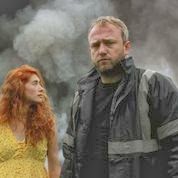 On Friday, January 31, Aquila presents Ray Bradbury’s Fahrenheit 451—one of the most revered novels of the twentieth century. Considered a work of science fiction when first published, Fahrenheit 451 is set in a dystopian future where literature and knowledge are on the edge of extinction. With its skill at creating innovative and modern productions of great works of literature, Aquila Theatre breathes new life into Bradbury’s visionary parable of a society gone awry.

Read The Book/See the Performance Opportunity for Fahrenheit 451:
The Intersections Book Discussion Group’s January 21 meeting offers a unique opportunity for Ray Bradbury enthusiasts, Aquila Theatre fans, and literature lovers alike. Pick up the internationally acclaimed Fahrenheit 451 – for the first time or for a timely reread — and join an animated conversation about the book on Tuesday, January 21 at 6:30 p.m. in The Forum at Diana Wortham Theatre, prior to experiencing Aquila’s performance on stage on January 31. There is no charge to participate in the Book Discussion Group. Pre-registration is recommended by calling 828-210-9837 or by emailing rae@dwtheatre.com. 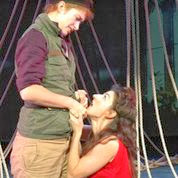 Then on Saturday, February 1, Aquila stages Twelfth Night, one of Shakespeare’s funniest and most charming comedies. Written in 1600 and set against a background of romance and mystery, this hilarious story of identical twins and mistaken identity, set in the mystical world of Illyria, explores the universal themes of love and all its ambiguous effects on human behavior. Aquila takes this great Shakespearean masterpiece and infuses it with a unique brand of innovative and exciting theatricality and its creative team frees the essential spirit of the play in a production that is both faithful to Shakespeare and relevant and accessible to a modern audience.