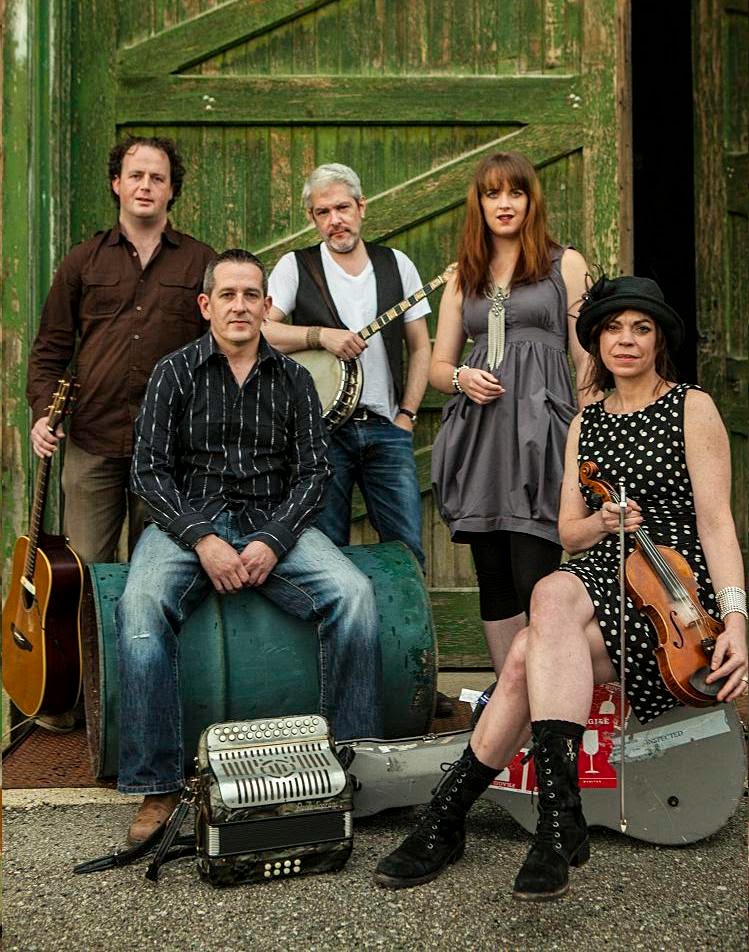 Magically contemporary yet timeless, the Irish-American super group Solas takes the stage at the Diana Wortham Theatre on Friday, February 27, 2015 at 8:00 p.m. Touring in support of its multimedia project, Shamrock City, Solas is a lightening rod of talent and inspiration, electrifying crowds of all musical tastes. Since busting onto the world stage in 1996, the band has been trumpeted as “the first truly great Irish band to rise from America” (Boston Globe), and ranked among “the most exciting bands anywhere in the world” (Irish Echo).

Solas’ latest landmark project, Shamrock City, is a multimedia event combining songs, stories, music, and historical imagery in a captivating live stage performance. Shamrock City tells the story of copper mining town Butte, Montana, at the turn of the 20th century, as seen through the eyes of Irish immigrant, Michael Conway, the great uncle of Seamus Egan’s father. In 1910, Conway sailed from Cobh, County Cork, Ireland to Philadelphia before making his way to Butte and the mines. Conway’s journey and plight inspired the band to explore the role of immigrants in the development of industrialized America.

For 15 years, Solas has been recognized as the most popular, influential Irish-American super group, stepping out onto the world stage in 1996 when Irish music was at the brink of a new era of innovation and popularity. The five young musicians who made up the band at the time had no idea that they were to be a galvanizing element in the Irish music scene – a lightning rod of talent and inspiration that set new standards for musicianship, repertoire, and intensity. “We thought we were doing a one-off project,” says multi-instrumentalist Seamus Egan with a smile, ten years after the fact. Egan and fiddler Winifred Horan have remained with the band through more than a decade of critical acclaim, ten albums, and endless international touring.

Philadelphia-born, multi-instrumentalist and founding member Seamus Egan leads the traditional Irish group whose music was featured in the film The Brothers McMullen. Eagan’s bandmates include: fiddler and fellow founding member, Winifred Horan, formerly of Cherish the Ladies; Mick McAuley from Kilkenny, Ireland, on accordion, concertina, and low whistle; North Ireland's Eamon McElholm on guitar and keyboards; and Nimah Varian-Barry of County Cork as lead vocals. She joined Solas following the release of its 2010 album The Turning Tide.

Solas has performed at all the major Celtic and folk festivals, including Philadelphia, Edmonton, the legendary National Folk Festival, and Milwaukee’s Irish fest; but also at Telluride Bluegrass Festival, and the chamber music summer series at Steamboat Springs, Colorado. The band has performed at Symphony Hall, Wolf Trap, the Ford Amphitheater, and Queens Hall in Edinburgh, Scotland. In New York City, where they were based in their early years, Solas played the legendary Bottom Line folk club, and classical venues such as Town Hall and Symphony Space.

The entrance for the Diana Wortham Theatre is marked by the location of the theatre’s marquee between 12 and 14 Biltmore Avenue. Patrons enter the theatre through the breezeway between Marble Slab Creamery and White Duck Taco, and into a large interior courtyard with multiple glass doors to the theatre’s main lobby and box office. The intimate theatre seats just over 500 and boasts exceptional acoustics and sightlines, making it the premier performance space in Western North Carolina. The Mainstage Series is supported by a grant from the North Carolina Arts Council, a state agency. The Mainstage Series 2014/2015 Season Sponsors are the Asheville Scene, Blue Moon Water, Creative Energy, Laurey’s Catering and Gourmet-to-go, the North Carolina Arts Council, and the Renaissance Asheville Hotel. To obtain more information on the Mainstage Series or to purchase tickets, call the theatre’s box office at (828) 257-4530 or visit www.dwtheatre.com.

Posted by Asheville Chamber at 12:04 PM