The uniquely American essence of George Gershwin’s Rhapsody in Blue will be on display on Saturday, November 19, as the Asheville Symphony presents its third Masterworks concert of the season.

“One of my missions with the ASO has been to champion music of our time and music of our country,” says Daniel Meyer. “We have a treasure trove of music from fascinating American composers, and I have chosen a sample from among the finest works composed in the past century to take a closer look. Rhapsody in Blue is a perfect document of Gershwin’s virtuosity at the piano keyboard as well as with the composer’s pen. We are pleased to be joined by Conrad Tao, a rising composer-performer in his own right, who will bring his vitality and creative flair to this quintessentially American music.” 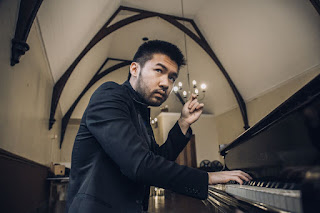 Conrad Tao has appeared worldwide as a pianist and composer, and has been dubbed a musician of “probing intellect and open-hearted vision” by The New York Times, and “ferociously talented” by Time Out New York. He was named a Presidential Scholar in the Arts by the White House Commission on Presidential Scholars and the Department of Education; a Gilmore Young Artist, an honor awarded every two years highlighting the most promising American pianists of the new generation; and has received the prestigious Avery Fisher Career Grant.

The evening opens with two pieces by Aaron Copland: Our Town and Billy the Kid. The music from Our Town is a perfect representation of how poignantly Copland was able to capture the American mood and create an American sound that is instantly recognizable. His Billy the Kid bristles with Western drama, complete with whip cracks and a gunfight.
Also on the program is David Diamond’s Symphony No. 4. This work represents a generation of composers steeped in European musical forms, yet Diamond manages to put a decidedly American stamp on his work.