Asheville artist and illustrator Al Ramirez will be demonstrating at Gallery of the Mountains on November 11 from 1 – 5pm. Visitors will have the opportunity to learn about his creative process and watch him paint a cardinal from his popular Mountain Birds series. Taking a year’s worth of study and dedication to produce just 12 birds, Ramirez has successfully captured the essence and spirit of each Western North Carolina bird as well as the majestic mountains we share with them. 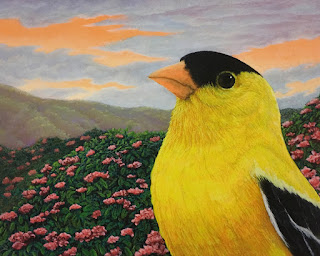 Ramirez has had a long career as an artist. Highlights include working as a comic book colorist, finisher, and co-illustrator with collaborator and good friend Jackson “Butch” Guice, a nationally known comic book artist. From 1984 to 1992, Butch and Ramirez worked on Superman with DC Comics, followed by the X-Factor graphic novel, Nightbreed, Hellraiser as well as various projects for Action and Acclaim Comics. Ramirez has also done a number of commissioned illustrations and free-lance art projects, including paintings for the Tri-Star movie Private Eyes starring Don Knotts and Tim Conway, shot in Asheville, NC.

About Gallery of the Mountains:

Gallery of the Mountains features over 100 local and regional artists of the Southern Appalachians. The gallery is located inside The Omni Grove Park Inn (Sammons Wing Promenade - Lobby Level).

Posted by Asheville Chamber at 1:11 PM