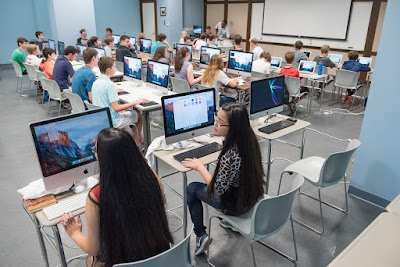 Making a peanut butter and jelly sandwich seems like a simple task. Take bread, add the peanut butter, add the jelly and you’re done. But if you think like a computer and follow those directions, you’re going to end up with quite a mess. Local teenagers learned just that on July 17 with the first day of Asheville School’s App Camp, where over the course of the next week they will learn to code apps for iPhone, iPad and Apple TV.

Asheville School App Camp instructors Charles Long and Bob Williams aim to teach campers the basics of coding, which starts by thinking like a programmer to build those sandwiches.

“We start campers off with a base and give them the foundation they need to succeed in programming,” Williams said. “Once they understand these concepts they can apply them to different languages.”

“This new technology is really exciting,” Williams said. “It will come out this fall with the release of the new iPhone and iOS 11. If our campers are motivated, they can create an AR app on their own by the time iOS 11 comes out.”

This week, campers will learn how to design and program an animated hot air balloon, which they will be able to virtually launch from the Kehaya Lawn at Asheville School.

“ARKit is really exciting because you can create three-dimensional objects and animations that you can interact with using the camera on your phone,” said Williams. “We will be ‘launching’ a hot air balloon, creating characters, and learning how to program apps with interfaces similar to Pokémon Go.”

This is the third year that Asheville School has offered the day camp, and it has grown this year to offer two week-long sessions. “The fact that we started at one week with only 11 campers, sold out year two with 25 campers, and are now expanding the camp to two weeks to accommodate the demand, is remarkable,” Long said. “It lets us know we’re doing our part to expose young minds to computer science with effective and enjoyable methods.”

This camp is unique in Western North Carolina, and Long and Williams strive to create an opportunity for teenagers to immerse themselves in the world of computer science during each week. During the July 17th keynote, campers learned about the business side of programming from two Apple representatives: Systems Engineer Greg Hall and Enterprise Consulting Engineer Josh Wisenbaker.

Long hopes the camp will inspire students to keep learning about coding and computer science. “There is a major shortage of qualified people in the Computer Science field because they are in such demand these days,” he said. “Learning to code isn’t difficult as long as willing Computer Science instructors give their knowledge and experience back to the youth. That is our focus with the App Camp. Not only are we addressing the need for Computer Science education, we are doing so using very familiar and popular tools that these students experience every day, the world of apps.”

Posted by Asheville Chamber at 2:55 PM