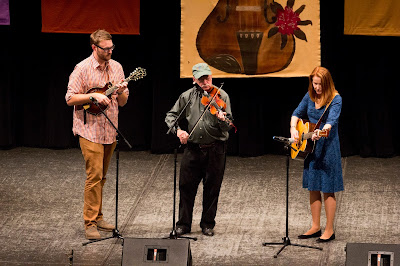 This is a milestone year for western North Carolina's second oldest folk music festival. The 2017 edition of the annual Bascom Lamar Lunsford "Minstrel of Appalachia" Festival will be the 50th for the event, held the first weekend of October each year on the Mars Hill University campus. A weeklong series of events is planned for the golden anniversary celebration, beginning Monday, October 2, and  including the most significant change for 2017 as the ticketed Lunsford Festival evening concert moves from its traditional Saturday slot to Friday, October 6. Saturday's daytime festivities, including the music and dance stage, will operate as usual on the university campus in conjunction with the Mars Hill Heritage Festival.

Organizers say the weeklong celebration will give them an opportunity to pay proper tribute to Bascom Lamar Lunsford's legacy. "We will have scholars to talk about Lunsford's contributions, music and dance to spare, and a few really special treats worthy of a golden anniversary," said Brandon Johnson, a consultant to the festival. "For now, I'll just say that at this year's festival you might be able to hear some very important and well-known instruments that haven't been heard in a long time."

Lunsford dedicated his life to traveling the Appalachian Mountains to find, memorize, and record the songs and dances so intimately woven into the mountain culture. He started the Mountain Dance and Folk Festival in Asheville in 1928, and from there was enlisted to help start the National Folk Festival. He became instrumental in the creation of multiple festivals throughout the United States, but it wasn't until Mars Hill pharmacist Ed Howard formulated a plan to name a festival in honor of Lunsford that he ever let one of his festivals carry his name. It was only with persistence and flexibility that Howard was able to convince Lunsford to allow the festival in his hometown of Mars Hill to be named the Bascom Lamar Lunsford "Minstrel of Appalachia" Festival, and then only with the clear understanding the festival would be dedicated to authentic mountain music and dance.

"This festival was founded as a musician's festival, and every year it brings the best that the mountains have to offer," said Johnson, a regular performer on the Lunsford Festival stage. "Speaking from experience, it's a time and place that we all look forward to every year. It's the only time some of us get to see and pick with each other, so it's become a fixture on all of our calendars."

The Friday evening concert at 7:00 p.m. in Moore Auditorium, featuring performances by the region's best ballad singers, dancers, and string bands, is a ticketed event. Events on Saturday, October 7, are free to the public and will take place on the upper quadrangle of the Mars Hill University campus. The Madison County Heritage Festival takes place on Main Street and College Street in conjunction with the Lunsford Festival. Hours for both festivals are 10:00 a.m. until 4:00 p.m.

More information will be forthcoming about Lunsford Festival events planned for earlier in the week of October 1, as well as ticket information for the Friday concert and performers scheduled for that concert and the Saturday festival stage. For updates and information, visit the festival website at www.LunsfordFestival.com or call (828) 689-1262.

Posted by Asheville Chamber at 11:43 AM