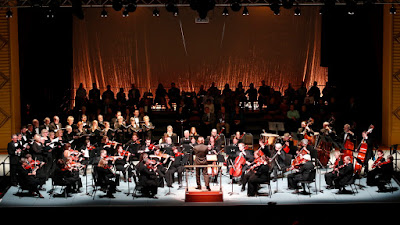 The Asheville Symphony is pleased to announce its 2017-2018 season, which will include a seven-concert Masterworks Series featuring the six finalists for the symphony’s music director position; a piano recital of Bach’s “Goldberg” Variations; and Music Director Daniel Meyer’s final concert with the ASO—a New Year’s Eve celebration featuring a performance of Orff’s Carmina Burana.

The Masterworks Series opens with a special Sunday matinee performance on September 24, under the baton of Daniel Meyer, featuring Grammy Award-winning pianist Yefim Bronfman. Hailed as “one of the most gifted and brilliant and versatile” (Washington Post) pianists around, Bronfman makes his Asheville Symphony debut with the Beethoven’s beloved “Emperor” piano concerto.

From there, each of the six conductors vying to be the Asheville Symphony’s next music director will conduct one of the remaining six Masterworks concerts. Audiences are in for a treat as each finalist brings their biggest and best works to the stage with world-class guest soloists.

“This season is going to be absolutely off the charts,” says ASO Executive Director David Whitehill. “Not only is Daniel Meyer ending his tenure with the ASO with an incredible opening night and a massive New Year’s Eve celebration, but our six incredible finalists are bringing programs that will knock your socks off—including some of the most celebrated works in classical music along with brand new works and even a bit of rock ‘n’ roll. Audience members will have the opportunity to give feedback on each finalist after his or her performance, so we know they’ll be giving it their absolute best.”

New on the schedule this season is a piano recital, which will be held on Saturday, February 17 at Central United Methodist Church in downtown Asheville. Pianist Alexandre Tharaud will perform Bach’s incomparable “Goldberg” Variations. His recording of this work was named among The New York Times’ “Best Classical Music Recordings of 2015.”

Series subscriptions and ticket packages are on sale now, and single tickets go on sale on Monday, August 28. Single tickets for all Masterworks concerts are $24–69, depending on seating section (reduced youth pricing is available). Tickets can be purchased online at ashevillesymphony.org, by phone at 828-254-7046, or in person at the U.S. Cellular Center box office at 87 Haywood Street.

Masterworks 2: Journeys
Saturday, October 21, 2017 at 8 p.m.
Rei Hotoda, conductor
Sandeep Das, tabla
In this program we take a journey to a world where there are no boundaries and Dvorak’s exuberant Carnival Overture sets the tone for our travels. From Bohemia we travel to India in Dinuk Wijeratne’s stunning Concerto for Tabla and Orchestra, with master Tabla player, Sandeep Das. Tchaikovsky’s Symphony No. 5, a powerful symphonic tapestry depicting the composer’s struggles, joys and triumphs, is our final destination.
Program:
Dvořák: Carnival Overture
Wijeratne: Concerto for Tabla and Orchestra
Tchaikovsky: Symphony No. 5

Masterworks 4: Scot Free
Saturday, February 10, 2018 at 8 p.m.
Garry Walker, conductor
Elena Urioste, violin
This program is a nod to the significance of the Scottish heritage and history in America, and conductor Garry Walker’s Scottish nationality. Mendelssohn, greatly affected by his visit to Scotland, juxtaposes a religious procession, a ceilidh dance, a love song, and a fast Strathspey in his “Scottish” Symphony. Debussy’s Marche écossaise seems to emerge out of the Scottish mists. Bruch’s timeless Violin Concerto No. 1 needs no introduction, but listeners might not know that his interest in Scotland ran deep, too. Malcolm Arnold’s Four Scottish Dances teem with character—listen for the bassoon solo in the second dance.
Program:
Arnold: Four Scottish Dances
Debussy: Marche écossaise
Bruch: Violin Concerto No. 1
Mendelssohn: Symphony No. 3 “Scottish”

Masterworks 5: Reborn
Saturday, March 17, 2018 at 8 p.m.
Nicholas Hersh, conductor
Itamar Zorman, violin
This exploration of how the Romantic voice resonates in the 21st century begins with Beethoven who catapults listeners from the 18th century into the modern age in the fiery Leonore Overture. Rachmaninoff calls upon both his 19th-century Russian roots and a lush, 20th-century orchestral sound to create a sweeping, semi-autobiographical epic in his Second Symphony. And between these monoliths, a living voice of Romanticism: Jonathan Leshnoff, whose soulful Chamber Concerto is played by the inimitable Itamar Zorman. Zorman also lends his talents to conductor Nicholas Hersh’s arrangement of Queen’s “Bohemian Rhapsody”—not only a rock classic but a postmodern Romantic masterpiece.
Program:
Beethoven: Leonore Overture No. 3
Leshnoff: Chamber Concerto for Violin and Orchestra (2015)
–Concerto encore–Queen/Hersh: “Bohemian Rhapsody” for Violin and Orchestra
Rachmaninoff: Symphony No. 2

Masterworks 6: Patriots
Saturday, April 14, 2018 at 8 p.m.
Jayce Ogren, conductor
Joyce Yang, piano
The sound worlds of John Adams, Manuel de Falla and Jan Sibelius are rooted in different countries, time periods and influences, yet these works of all three deal with nationalism, and each uses rhythmic drive and vigor to communicate that theme. The Chairman Dances—a vignette from John Adams’ infamous opera Nixon in China—paints a bitingly comic picture of the Mao regime. Manuel de Falla’s rarely-performed masterpiece Nights in the Gardens of Spain is a loving, Impressionist portrait of his country’s beauty and fire. The program closes with Sibelius’ great Symphony No. 2, a poignant tribute to the people of his native Finland.
Program:
Adams: The Chairman Dances
Falla: Nights in the Gardens of Spain
Sibelius: Symphony No. 2

Masterworks 7: Bend It
Saturday, May 12, 2018 at 8 p.m.
Jacomo Bairos, conductor
Jennifer Frautschi, violin
The final Masterworks concert of the 2017/2018 season is an eclectic program of genre-bending composers and works, beginning with the ultimate genre-bender, Bernstein, and his Overture to Candide. Next is Sam Hyken’s take on Vivaldi’s masterpiece The Four Seasons, which has influences of Jazz, ‘70s film noir, and even hip-hop while keeping one eye on the Baroque. Brahms’ reimagining of Hungarian Dances may be some of the first genre-bending music in the classical world, yet it is his deep symphonies, including Symphony No. 2, that stir the soul and transform the heart powerful ways.
Program:
Bernstein: Overture to Candide
Hyken: Four - A reimagining of Vivaldi's Four Seasons
Brahms: Symphony No. 2

New Year’s Eve Celebration
Sunday, December 31, 2017 at 7:30 p.m.
Thomas Wolfe Auditorium
Daniel Meyer, conductor
Isabelle Durrenberger, violin
The ASO continues its tradition of presenting a full evening of great music on New Year's Eve in a concert that will also celebrate the tenure of Music Director Daniel Meyer as he leads his final performance with the Asheville Symphony. The program opens with the opulent “Bacchanale” from Saint-Saens' opera Samson et Dalila. Next, up-and-coming violinist from the Cleveland Institute of Music, Isabelle Durrenberger, performs Wieniawski’s rhapsodic Violin Concerto No. 2. The evening is capped off by one of the most astonishing celebrations in all of music: Carmina Burana by Carl Orff, which includes a cast of three solo vocalists, the full Asheville Symphony Chorus, and the complete forces of the ASO.
Program:
Saint Saens: “Bacchanale” from Samson et Dalila
Wieniawski: Violin Concerto No. 2
Orff: Carmina Burana
Vocal Soloists: Elizabeth Caballero, soprano; Daniel Curran, tenor; Corey McKern, baritone
Piano Recital
Saturday, February 17, 2018 at 8 p.m.
Central United Methodist Church
Alexandre Tharaud, piano
Perhaps, pianist Charles Rosen describes Bach’s “Goldberg” Variations best: “It is the most open and public of Bach’s keyboard works, the one that most absorbs and transforms the popular styles of his time…The ‘Goldberg’ variations is a social work; it was meant principally to delight, and it instructs only as it charms." The ASO is joined for a recital of this iconic work by one of France’s leading pianists, Alexandre Tharaud, whose 2015 recording of the “Goldberg” Variations was named one of “The Best Classical Music Recordings of 2015” by The New York Times.
Program:
Bach: “Goldberg” Variations, BWV 988

Asheville Symphony Chorus
Saturday, April 28, 2018 at 7:30 p.m.
Arden Presbyterian Church
Dr. Michael Lancaster, conductor
Join in the celebration of Bach’s 333rd birthday as Dr. Michael Lancaster leads the more than 130 voices of the Asheville Symphony Chorus and members of the Asheville Symphony in Bach’s glorious Mass in B Minor. The massive opening Kyrie statement followed by the immense, solemn fugue launches audiences on one of the most epic of all journeys in music. This setting of the mass is unprecedented in its scale, majesty and sobriety.
Program:
Bach: Mass in B Minor, Part One: Kyrie & Gloria

Posted by Asheville Chamber at 4:38 PM